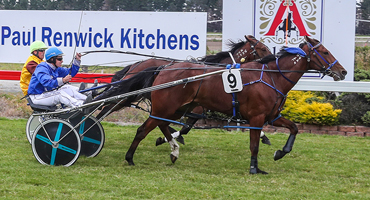 While the lockdown was hard going for many it had one major plus for Canterbury trainer-driver Anj Mugford. Now she looks across her family’s Leeston property and sees a brand new 800 metre training track.

“My grand-parents had this land, and it was actually called the “Track Paddock” and now there’s a track on it,” said Anj, “it was used for grazing but a cycle lane is going in nearby so the farmer moved on and it was empty.”

Not any more. Her father Neil, who just happens to own an equipment hire (Leeston Hire) and a landscaping business (XCV84U), decided building a new track would be a good way to spend his time during the lockdown.

“He’s the sort of guy who doesn’t stop till it’s finished. It took him 5 weeks pretty much.”

The track is all but done with only a layer of fine crusher dust needed to complete the job.

“I used to use Kevin Fairbairn’s place next door – now I’ll just be able to do things my own way.”

Mugford’s first winner as a trainer and a driver came in December last year when Night Lights won at Motukarara, paying $113. It remains her only win so far but the horse has gone on to win again across the Tasman.

“He was sold to Australia and has won three of four starts.” Based in Tamworth the horse is trained by Jarred Hetherington and was driven in both wins by Mick Formosa.

Now Mugford has seven horses in work, including Masada who won for the Michael House-Blair Orange combo at Manawatu Raceway last December, her 60-race maiden Don’t Tell Ange and a number of two-year-olds.

“Masada is by Sir Lincoln, finished second in a work-out, he’d be my best horse.”

From now on they won't have far to get race-ready,  thanks to a hard-working dad and his earth-moving equipment.