Life’s a beach for Markham Eyre 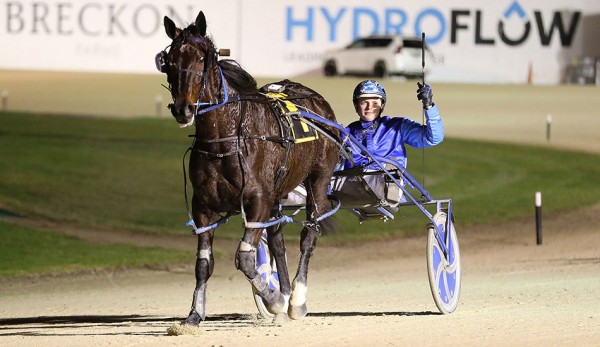 The five-year-old gelding has won three of his four starts since joining trainers Greg and Nina Hope’s Woodend Beach stable, and they are hoping he can add a fourth at Addington Raceway on Friday night.

The son of Sportswriter had previously won two races for breeder, part-owner, and former trainer Mike Brown and his new handlers think the change in environment and luck on raceday have been the telling difference in his form reversal.

“We work three or four together all the time and I just think he really enjoys the beach,” Greg Hope said.

“I think it was a combination of a lot of things. We did a couple of small gear changes on him as well and changed his shoeing around.

“He had a bunch of really bad draws for Mike and since we have had him we have been lucky to draw some good marbles and he has been able to get himself in a good position.”

Hope has been pleased with Markham Eyre’s run of form heading into the Hanley Formula Mobile Pace (2600m) on Friday but believes Group Three performer That Alexander Guy may just be too classy for his competition.

“We feel as though Alexander Guy will probably be too good, being the highest rated horse, and he has been going some great races,” Hope said.

“But Makham Eyre will go another great race, he has been working great.”

The Hopes will also line-up Rockntommy Rulz in the race.

“He is more than competitive in that grade and has been getting home well in his races,” Hope said.

“He is a sit and sprint horse, and he has got to be driven for one run, he is just that type of horse in the grade that he is in now.

“He will follow speed all day and if they go really hard he will be running home strong.

“Being a small field over 2600m, he should be more than competitive.”

Later on the card stablemate Sheeza Artist will by vying to keep her undefeated record intact in the Faulks Investment Fillies & Mares Mobile Pace (1980m).

The five-year-old mare has won both of her raceday outings to date, however, Hope does hold concerns about the daughter of Art Major meeting the mobile for the first time at the races.

“She is probably a better standing start horse. She has won both of her races from a stand,” Hope said.

“There weren’t any stands suitable for her so we have ended up going behind the mobile.

“From the gate she might get a bit keen and overrace a bit, that’s the only concern with her.

“We are pleased with her work, but we are not overly confident.

“It will be interesting to see if she can take the next step. It is a huge jump from where she was.”

Samantha Ottley will chase more trotting success when she heads to Ashburton on Sunday.

Craig "The Whale" Thompson looks at today's meeting at Ashburton.