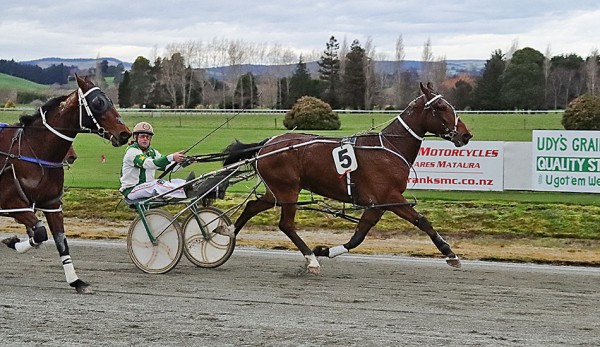 Trainer Doug McLachlan didn’t have to thank too many people after producing Brigadier’s Son to win at Young Quinn Raceway on Thursday.

McLachlan bred, owned and trained the three-year-old who kept rolling in the lead to break his maiden in race 9 for driver John Morrison.

Remarkably, the trainer’s involvement doesn’t stop his owning, breeding and training of the pacer.

McLachlan trained both Brigadier Son’s sire Bettor’s Brigadier and his dam Red Electric and took their resulting foal through all of his early education, as well.

The veteran horseman was naturally thrilled but also humble when reflecting on the unique achievement.

“I enjoy every moment in this game, it was great,” McLachlan said.

“To be honest I don’t think you could find a better bred horse.”

“He has got it all there in his pedigree, he’s from a Bettor’s Delight stallion and from an Art Major mare.”

“And he’s got Soky’s Seal the dam of Soky’s Atom on his dam’s side.”

Red Electric placed 10 times in her 54 start career for McLachlan before she was retired.

Bettor’s Brigadier won 10 races and placed 13 times for the trainer in 93 starts.

Bettor’s Brigadier is the sire of seven registered foals from dams by a wild array of sires including Make A Deal, Attorney General, Barnett Hanover and Tinted Cloud.

McLachlan thinks Brigadier’s Son has a decent chance of adding more wins to his sire and his dam’s record.