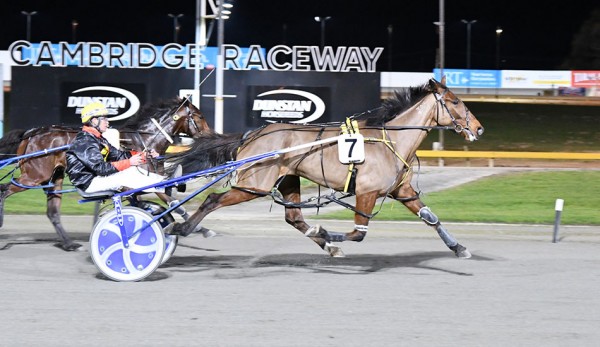 Winning your first race is always a memorable occasion and Cambridge trainer Rodney Frampton is no exception.

Frampton recorded his first win as a trainer at his home track of Cambridge Raceway on Thursday night courtesy of Sky Delight in the Quiz night @ The Clubhouse Every Wednesday Mobile Pace (2200m).

The daughter of Bettor’s Delight settled well for driver David Butcher, who bided his time at the rear of the field before finding the one-one with 500m to go courtesy of a tiring Imelda May.

Butcher asked his charge to improve three wide turning for home where Sky Delight was able to storm home to win by 1-1/4 lengths over Miss Hathaway, with a further length back to Emmi rose in third.

Frampton was duly delighted with the result and securing his maiden training victory.

“It was a big thrill. I was very pleased to get it (first training win),” he said.

“She seemed to get a good run into it and she got over the top of them really well.”

Sky Delight was having just her second start for Frampton after joining his stable earlier this year following her purchase by his brother-in-law, Graeme Henley.

“Graeme Henley from Alabar bought her as a broodmare proposition,” Frampton said. “She is a Bettor’s Delight half-sister to Sky Major, and still being a three-year-old filly he thought he would race her for a little bit and see how she goes.

“Her last start (fourth) was her first start since December, and her first run for me, and we were quite happy with it.

“She improved with the run, so it was good to see that tonight.”

It was apt that Frampton recorded his first training success at Cambridge Raceway, the track where he started his career nearly forty years ago.

“I started off as a young fella working in the school holidays for Charlie Hunter,” he said.

“When I left school I started to work for John Langdon and I was there for four or five years. I then had a bit of a break and went overseas for a little while.

“I came back and worked at a dairy company for a while and then I had a horse with Andrew and Lyn Neal. I had another one with David Marshall and I helped him out a little bit.

“I then started to work for Mike Berger and then Arna Donnelly, and now I am enjoying training myself.”

Frampton is enjoying working half a dozen horses and said he gets a lot of support from Alabar Stud as well as local trainer Mike Berger.

“I jog up a couple for Mike Berger, he has been really good with helping me out,” Frampton said.

Frampton is glad to be back working with horses and earning a living from something he is passionate about.

“I am quite happy training a few and breaking in a few, and making a living doing it,” he said.

“I have worked in other careers, so it’s quite good being able to work with horses. I enjoy it.”