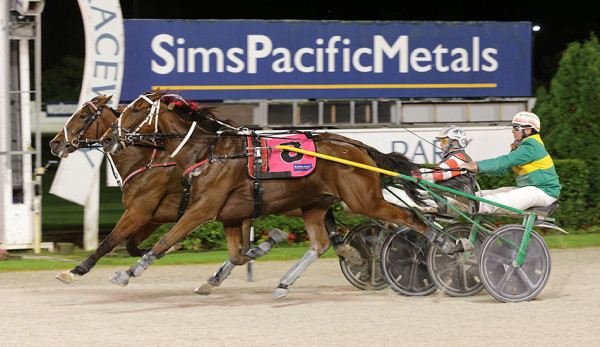 Charlie Hunter and his old mate Lemond may have both been in the wars but only one of them is retiring.

And as you could probably guess, it will be the horse not the man.

Hunter has called time on the career of his Anzac Cup-winning trotter after trying everything to get him back to his best.

The now eight-year-old winner of 15 races recently returned south from a stint with Paul Nairn, who told Hunter there was something niggling the horse he couldn’t quite put his finger on.

After regular trainer Ross Paynter tried again with Lemond he suggested the son of Love You joined Andrew and Lyn Neal to see if treadmill work would ease the stress on his joints but again he struggled.

“I went out to watch him work two or three times and decided he had had enough,” says Hunter.

“He is on such a tough mark if he wants to race it is either in open class or off long marks at Alexandra Park and I didn’t want to do that to him.

“I’d hate to see him break down so we have retired him nice and sound and a young fella who works for Ross is breaking him into saddle and we are going to find him a good home.

“So if anybody out there wants a lovely horse they will look after we would love to hear from them.”

While he won over $300,000 Lemond could have been far more successful had it not been for those issues that dogged him, which often looking like poor manners when in fact it the niggles were stopping him showing his full potential.

He won an Anzac Cup, finished second in another and was third in a Dominion and fourth in a Rowe Cup after sitting parked.

He also set two national records, for 2200m stand and the all-comers 1700m mobile record he still holds, beating the old mark set by another of Hunter’s stars in Sovereignty.

The 86-year-old legend of harness racing has himself had his battles lately.

Hunter was diagnosed with bowel cancer two years ago and had that successfully treated before having a melanoma removed from his head this year and during those treatments there was concerns about some lymph nodes in his chest.

“I was lucky to have a couple of wonderful doctors work on me and last week I had a procedure where they use large needles to take samples from those lymph nodes and test them for cancerous cells,” explains Hunter.

“When you have a test like that you look at your wife, and your family, and wonder what happens next.

“But we have got the results back and they told us they are not cancerous but still need some treatment.

“So it has been an interesting time all right, but you know what, you just take it all in and keep going.”

So with no horses in work and a few health issues, is Hunter taking time off from the stables in the mornings?

“Oh no, I’ll still go to the stables in the morning when I can. It is just around morning tea time at the moment, not quite as early.”