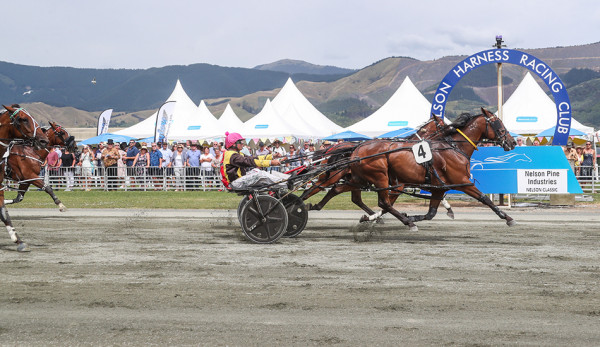 Laver showed his toughness in more ways than one when running to a stunning track record breaking victory in the Nelson Pine Industries Classic on Sunday.

Sitting parked for much of the mile (1609m) feature was not enough to stop the Geoff and James Dunn trained pacer from producing the toughest of victories and stopping the clock in a jaw-dropping 1.51.9 time.

As tough as that sounds, the four-year-old’s trip outside of a game leader and runner-up in Spellbound may not be the grittiest aspect of his win.

Because the almighty victory came just two days after Laver served up a mammoth performance when missing away in the 3000m Nelson Cup, before catching the field and working around to again sit parked and finishing less than half a length from the winner, Kruizr.

For that run not to have even the slightest impact on his pacer and for him to then produce such a brilliant mile effort on Sunday was testament to Laver’s toughness, Geoff Dunn said.

“It is unreal, after that hard run on the first day he ate and drunk like you wouldn’t believe.”

“I thought that might knock him, but I was pretty happy with the way he was before he went into [Sunday’s] race.”

“I think it is their ability, if they are tough enough they will handle it.”

“We have thought hard runs have knocked him before, but if he was ever going to get knocked it was going to be today.”

With one of New Zealand’s fastest mile times to his name and his rating climbing into the 70s, Laver looks to be on a one-way path to open class.

The high pressure of top level racing looks made for the four-year-old if he can keep progressing there.

“The way he can run on the speed you would think he would handle it,” Dunn said.

“But he can run the times obviously and the only times he looks like an average horse is when he goes too slow.”

“When he has been at Motukarara on the grass, he doesn’t wear earplugs, and Gerard [O’Reilly] reckons there is not enough noise out there and he can’t get him motivated.”

“And the only time he looks average is when he gets out-sprinted.”

Should he make open class, Laver will have got there in much different circumstances to his dam, Venus Serena.

A group 1 winner as a two-year-old, the classy mare basically stepped in to top company as soon as she hit the track.

But as time has gone on and his record has become more impressive, he shows more of his dam’s star qualities.

“He is starting to get that way because he is getting bigger,” Dunn said.

“She always had a monstrous back end and had a powerful size and he is starting to develop the same way.”

“As he has got older he has started to get stronger.”

The Dunn camp does not have any set plans for Laver following his outstanding win but plan to give him a quiet few days this week.

“We will just take it as it comes and just see what race comes up next in his grade.”

“His rating is getting a bit higher now.”

“But we will give him a few days off after this to make sure he gets through it alright.”