Lady Of The Light going for five straight 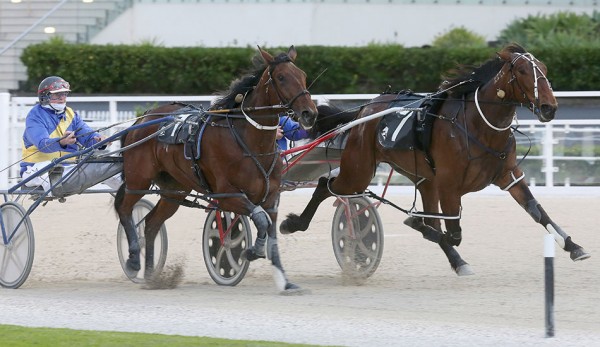 Lady Of The Light is the horse trainer Jeremy Young has been waiting for but he says that isn’t the only reason he wants the high class filly to remain unbeaten at Alexandra Park tonight.

The Pukekohe horseman has been involved in one of harness racing’s greatest winning streaks and says picket fence formlines are good for the industry.

Young is establishing himself as a trainer in his own right after his earlier career working for other trainers included a stint as the travelling foreman with Auckland Reactor during his 17-start unbeaten start to his career.

Young says the adulation from crowds and the interest winning streaks build in the public are wonderful for racing and while he isn’t kidding himself Lady Of The Light’s four unbeaten starts have the public salivating he thinks even mini streaks are important.

“I was talking to Maurice (McKendry, driver) about it the other day and we were saying how these days picket fence formlines are hard to come by, especially with the handicapping system the way it is,” says Young.

“But I think punters love them, they love backing a horse who keeps winning and watching how far they can go.

“So to have a filly who has even strung four wins together is exciting and we hope people tune in to watch her on Friday.” Lady Of The Light (R7, No.3) should make it five unbeaten starts as she is drawn well against horses she has predominantly beaten in the past.

“I think she can win this week because she is the best horse I have had,” says Young, who has already won a Great Northern Oaks with Best Western.

“She is bigger and faster than Best Western and I am hoping she can go on and win a good race to give me that boost, to bring in some owners who might be keen to go after some nice horses at the sales.”

Young may only train 12 horses but four of them are racing tonight and there is also stable confidence around May Delight (R1, No.1).

“She has the right draw for the mile this week so I think she really gets her chance,” says Young.

John Wayne (R3, No.6) was a smart last start winner but meets some handy opponents in Ultimate Missile and Rocknroll Roulette but is worth following over the summer while Young suggests punters should also stick with Flying Tommy (R5, No.7) even if he is beaten from a wide draw in a hot maiden field tonight.

There is plenty of NZ Cup week form in tonight’s two main races with She Reigns fresh back from Addington, where she finished a brave third in Cup Day, and looking perfectly placed in race four tonight, where she has 30 rating points on her rivals.

Major Jellis is in a similar position in race nine, being clearly the best pacer in his field and even though he has to start from the outside of the front line in the mobile mile his last-start win was, albeit with a handicap start, over subsequent New Zealand Cup winner Copy That.