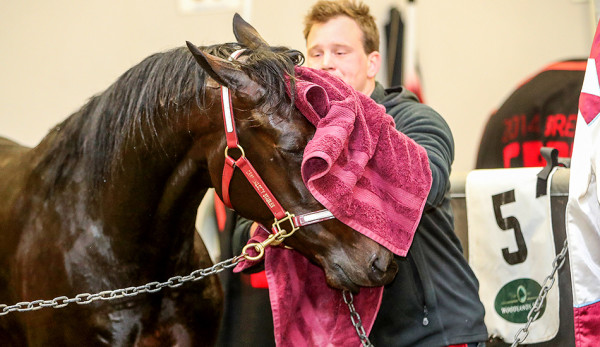 Fresh off a northern campaign where he won the Listed Harness Million 1 C & G Final (2200m) and finished runner-up in the Gr.1 Sires’ Stakes Final (1700m), he was quickly back in the winner’s circle at his home track after taking out the Woodlands Stud NZ Sires’ Stakes Series Heat 1 Mobile Pace (1980m).

In his customary style he was launched off the gate by driver Blair Orange to assume a front-running role and didn’t relinquish his advantage, running away to a comfortable one length victory over archrival It’s All About Faith.

The son of Bettor’s Delight was given a freshen-up on his return to Canterbury, but his connections were keen to get him back to the track in preparation for the Gr.1 Woodlands Stud NZ Sires’ Stakes Final next month.

“We gave him a wee break when he got home from Auckland,” said Chrissie Dalgety, who trains the colt in partnership with Nathan Purdon.

“The Sires’ Stakes was creeping up on us so we thought we would put him in the heat tonight and keep his fitness up. We were really pleased with his performance tonight.”

Dalgety and Purdon had been pondering on sending Krug across the Tasman for a Breeders Crown campaign, however, they decided keeping the talented three-year-old at home was a more logical option.

“The last month we have been toing and froing between staying here for the Sires Stakes or going to the Breeders Crown, but with the quarantining it’s not really feasible so we have decided to stay here.

“He has got a magnificent group of owners that absolutely adore him, so it is nice that they can see him race whereas they wouldn’t have been able to get to Melbourne.”

Krug was purchased out of Smolenski Stables’ 2019 New Zealand Bloodstock Standardbred National Yearling Sale draft by Cran Dalgety under his Kentuckiana Lodge banner for $155,000, and Dalgety said they have been smitten with the colt ever since.

“His breeding is impeccable and Cran eyed him up pre-yearling sales and we had a really good look at him,” she said.

“We secured him and when we were able to get him home from the yearling sales we were thrilled and then breaking him in and going through the motions he has just been such a great horse to deal with. His personality is amazing.”

Later on the card at Addington, Purdon and Dalgety recorded a winning double courtesy of Cardinal Sin in the Canterbury Trotting Owners Association Mobile Pace (1980m).

“It was great to see Cardinal Sin win,” Dalgety said. “We just gave him a bit of a break in-between races this time and he seems to like that. He stepped out tonight and did well.

“We are concentrating on his work ethic at the moment and spacing his races slightly. We will just take things race-by-race with him.”