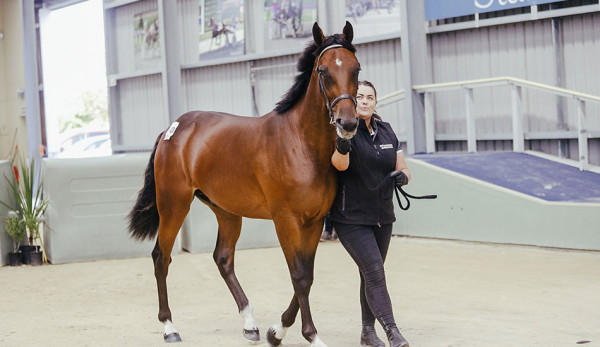 Having almost beaten cancer, selling the top lot at NZB Standardbred’s trotting sale in Christchurch on Monday was a moment to savour for Southland breeder Dave Kennedy

Kennedy’s Father Patrick colt from Sundon mare Rae Galleon topped the trotting section of the National Yearling Sales in Christchurch when knocked down to leading trainer Robert Dunn for $120,000.

The Otautau breeder is set to cherish selling his Father Patrick colt more than his 2019 sale-topper or any other yearling he has offered in his 29 years as a National Yearling Sales vendor.

Kennedy’s battle with B cell lymphoma – a form of blood cancer – has taught him to savour every moment he can.

“You have just got to take what comes – it has never worried me I have just gone with it.”

“But I was very weak for a while there, I couldn’t pull the skin off a sausage.”

“I couldn’t walk from here to that (nearby) box over there.”

“But we are good now, we are on the road to recovery.”

“You don’t know what is around the corner, you have to enjoy every moment.”

Kennedy hopes his Father Patrick colt has started what could turn out to be a brilliant week.

He will offer five pacing yearlings at the National Yearling Sales on Wednesday and Thursday.

Kennedy will then see his oncologist on Thursday to assess the next stage of his cancer battle.

“I will see the oncologist on Thursday, I have still got a couple of tumours in there and I am going to be having radiation [therapy] to zap them.”

Kennedy said he was rapt to see his yearling going to the trainer of the country’s best trotter, Sundees Son.

The Southland breeder went into Monday’s sale hopeful of a good result, but far from expecting his Father Patrick colt would take top billing at the Christchurch trotting sale.

“I am absolutely delighted, it is totally unexpected,” Kennedy said.

“I knew he was a nice horse but I didn’t expect him to do anything like that.”

Kennedy not only has preparer Katrina Price to thank for his standout result.

Lot 140, named Cochise, is the only foal he has bred from Rae Galleon after he was offered the chance to breed from her by long-serving harness racing administrator and fellow breeder Gary Allen.

“Gary offered me the chance to breed from her, so I put her in foal to Father Patrick and here we are,” Kenned said.

“It is unbelievable, really.”

Williams admitted it was an emotional return to the National Yearling Sales following the death of his late wife Heather in November of last year.

The husband and wife had produced outstanding results together over several decades as National Yearling Sales vendors.

Williams’ Majestic Son colt was knocked down to the McLean family of Victoria.

That result represented an increase from last year’s $34,642 average.

The sale’s aggregate fell from last year, largely because of a 10% drop in clearance rate to 69%.