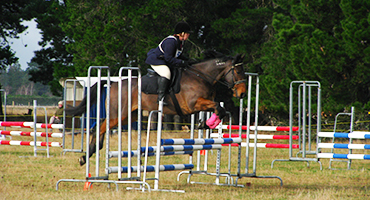 Any mention of “Jonty” and Tash Bol fair beams with pride. She’s had him for 18 years.

“He’s the most spoilt horse, I spend the most on him, what Jonty wants, Jonty gets , new rugs, best feed, lots of stuff.”

And the admiration for Jonty is not hers alone. He has just won a photo competition run by the Standardbred Breeders’ Association on Facebook. His was judged the best from 175 entries.

“It’s a cool photo, the way he has his knees tucked up.”

In his prime he had been jumping to a metre, with the photo in question taken about 10 years ago at a one day event at Oxford.

But Jonty is nothing if not versatile.

“He’s been a winner of novice dressage, ODEs (One Day Events), Round the Ring Hunter, a park hack champion – you name it. He’s won it”

She got Jonty when he was three. He never cut it as a racehorse - “he would lie down in front of the jogger” – and Tash admits it hasn’t always been a perfect relationship.

“We had our ups and downs, when I first got him he wasn’t the easiest, he was a strong horse but we persevered and came out the other side.”

For winning the photo competition Tash will receive $250 worth of vouchers from Dunstan Horse Feeds. In these trying times she’s decided to spread the love to five other people. She will donate five $20 vouchers and her friend Lou Tait has agreed to add five $20 petrol vouchers as well.

“It’s about paying it forward,” says Tash, “just to help out some people who are feeling a bit down.”

As for Jonty he’s now 21 and the “boss horse” of the 5 standardbreds and crossbreds she has at her Coutts Island property near Christchurch. Among her plans, she wants to try and qualify him in the Pleasure Horse section at next year’s Horse of the Year