Job done for Williamsons across the ditch 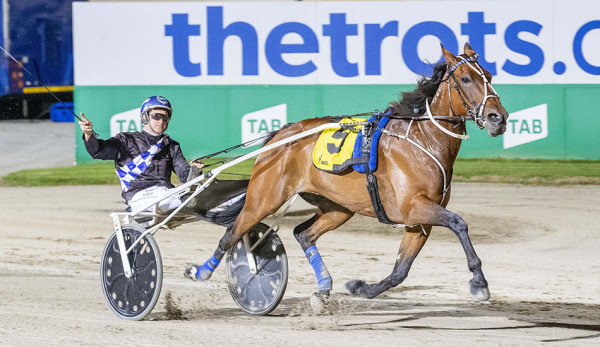 But his champion driver Brad Williamson is still weeks away from following suit.

“The horse raced phenomenally and Brad did a sterling job,” says trainer and proud dad Phil Williamson from his Oamaru base, “we were thrilled.”

Utilising his trademark speed off the gate the six-year-old Majestic Son gelding banked over $150,000 in just over a month. He had six races during the trip – all at Group One level – for three wins, a second, a third and a fourth.

“It’s been an incredible trip, one I’ll never forget,” Brad Williamson said. They were the 26-year-old’s first Group One triumphs.

“The campaign looked ideal for him on paper, but there was so much work went into making it happen because of COVID-19 and the travel challenges.

The problems began before they even left in January.

“We had three attempts to leave - the problem was getting the horse’s blood cleared,” says Phil Williamson, “a lot of effort and preparation went into it and if we had been clouted in that first race we would have been in a world of hurt.”

As it turned out the horse won his first up assignment across the Tasman (the Dullard Cup), and then the Grand Prix also at Melton, before adding Saturday night’s NSW Trotters’ Mile when he led throughout and cruised around in 1 min 53.5 seconds.

In contrast the horse’s last campaign in Australia in 2020 wasn’t nearly as successful. Then he had an “altercation” with a kangaroo.

“It was like a tiger to him,” says Williamson Snr , “he hates them.”

Now Majestic Man will get a freshen up, it’s well earned.

“He was racing every week, sometimes two times a week … he is rock hard fit,” says Williamson

“He’ll be on a flight tomorrow (Tuesday) and he’ll spell at Oamaru.”

Then he’ll be aimed at the ANZAC Cup in April and Rowe Cup (May) in Auckland. In 11 starts at Alexandra Park he’s never finished out of the money, with one win, five seconds and five thirds.

“He’s not the best trotter in the country – that’s Sundees Son – and there are those four-year olds (including Bolt For Brilliance) but he is one of the best.”

As for son Brad his return home has been hampered by a lack of flights and places in managed isolation in New Zealand.

“He’ll be home in April and then have two weeks in quarantine.”

In the meantime he’ll continue to work with ex pat Kiwi trainer Anthony Butt in Melbourne and Sydney and hopes to check out some of Australia’s biggest and most successful stables.