He reached the milestone when he steered Star Casino to a gritty victory in the NZB Standardbred Mobile Pace (1980m) at Addington last night.

When asked about it afterwards he said "that's good innit?".

It was Star Casino's first win in ten starts. The favourite was four back the fence at one stage before sitting parked. In the final stages Best Trio loomed and looked a likely winner before Curtin urged Star Casino to a neck win.

Fittingly Star Casino, a two year-old son of Bettor's Delight,  is owned and raced by Russell Nieper - they've had a lot of success together.

"I've had a lot of Russell's horses over the years - he's a good owner, one of the best." 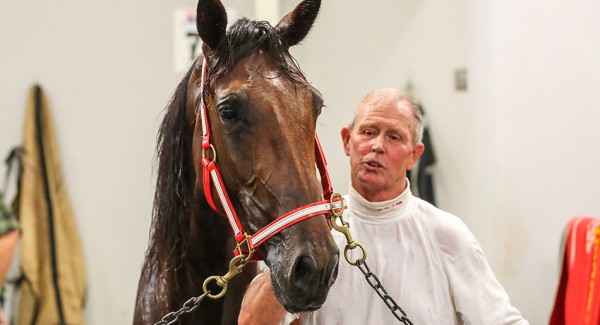 Post race Curtin told Harness Racing Unhinged's Nigel Armstrong that the win came on his favourite track, Addington and that his best training success "was Franco Emirate winning the Jewels."

That was 10 years ago in the 4YO Emerald at Ashburton when Franco Emirate overcome a tough draw to wear Gomeo Romeo down with a massive run out wide. The Curtin whip flourish at the end said it all.

These days Curtin trains a team of around 10 at his Templeton property.

As well as the 300 training wins there are 1633 wins as a driver, including two New Zealand Cups. He was in the sulky when Terror To Love won the first of his three New Zealand Cups in 2011, and there was also Bee Bee Cee's success in 1994.

And there was a milestone last night for Chrissie Dalgety as well.

Remember Me's win in the Pascoes the Jewellers 2YO Fillies Pace at Alexandra Park was her 50th win as a trainer.