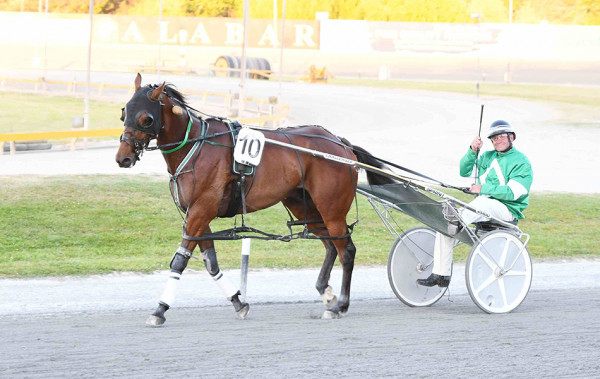 One of the forgotten talents of northern harness racing is loving being back in the sulky.

Even though it made for a crazy and rushed night at the office on Thursday.

Former star junior driver Phil Jeffries is back driving horses after a 12-year break and recorded his fourth win of the season with Ohoka Achilles at Cambridge on Thursday night.

These days the 52-year-old drives for fun, having being lured back into the game when he took over the ownership of an old trotting mare called Majestic Stride.

“Irvin was great to work for and I got to drive horses like Fern Glen and Mercury so I had a good run,” says Jeffries.

“But these days I am happy working at Breckon Farms and have great bosses who are passionate about the game.

“We took over an old mare called Majestic Stride and she was a bit funny to drive so I took my licence out to drive her and I’ve still got it so I am happy to keep driving, even though I don’t expect to get many drives.” Jeffries says trainers like Derek Balle and Ross Paynter helped him get trials drives to get his licence back and with Ohoka Achilles’s trainer Owen Gillies tied up with Balle he started using Jeffries as well.

“It is good fun to be out there again,” he laughs.

What wasn’t as much fun was Jeffries missing a drive earlier in the night because of problems at his main job but it was for the right reasons.

“We actually had a pipe burst in one of the paddocks and I was moving the young ones in there so they had water all night,” explains Jeffries.

“But one of them went the other way and I had to go catch him and move him too because I couldn’t have gone to the races on a hot night knowing he was in a paddock without any water.

“So that was more important than missing a drive but I didn’t have a phone so I was late telling everybody.”

Ohoka Achilles was recording his fifth win in 28 starts and second on end, his 3:19.6 for the 2700m a 1:59 mile rate so Gillies has done a superb job with the six-year-old son of Art Major who could be an ideal Country Cups horse among other things.