How fitting it was that Brad Williamson brought up his 400th driving success with his favourite horse.

"It was a good night and a nice race and a bloody good old horse in form," Brad Williamson told Harness Unhinged's Nigel Armstrong post-race, "every time he wins it's a pleasure."

The seven-year-old gelding's last win in this country was at the Cambridge Flying Stakes in January last year. Last night was also his first start since a disappointing campaign in Australia. In contrast, only a year earlier Brad Williamson and Majestic Man had won three Group Ones together across the Tasman.

Last night The Dominator led early, with Majestic Man going three back the fence with Kahress in the trail. Majestic Man was looking for gaps at the 600m and got a nice run up the passing lane, charging home to win by half a head.

"It was looking a bit niggly there but first up it was great to see him putting it in at the right end," trainer Phil Willamson told Armstrong.

"We just tucked away and he got a nice run and it was a genuine enough tempo and it just worked out well for him," says Brad Williamson.

Majestic Man was well-favoured fresh up against a field that was well down on what he's had to contend with in recent years.

"It's been tough racing Sundees Son and Bolt For Brilliance and them which he's had to race and he's had to be a bridesmaid in a lot of Group Ones to some good horses." 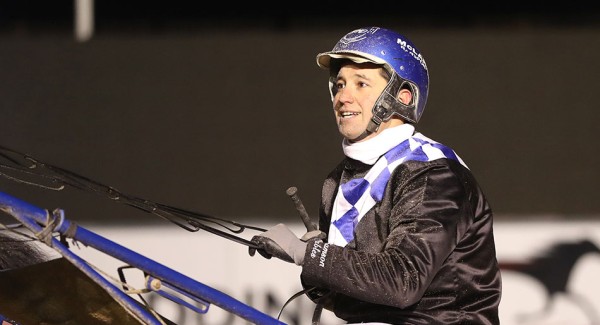 It was Williamson's 400th success in 3917 drives, after starting out exactly a decade ago. He's also trained 69 winners in the past four or so years.

As for Majestic Man's future, Phil Williamson is keeping an open mind.

"Any short distance races are his thing ...... as long as he's racing well the syndicate will keep him going."