Herbert winds back the clock 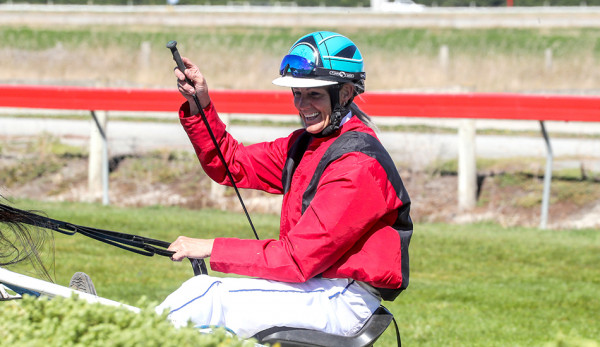 Driver Jo Herbert wound back the clock almost 18 years when she notched a race-to-race double at Motukarara on Sunday.

Herbert’s double was her first since 2003 and it came after she drove Taumata VC to win race 4 and Hello Adele to win race 5.

The reinswoman kept herself in her family’s good books when producing a perfectly timed run with the Colin and Julie DeFilippi trained Taumata VC.

The victory was a turnaround for the pacer after she could not capitalise on an even better run in her last start at Addington.

But the difference on Sunday was the four-year-old was in a winning mood.

“She has been due for that one for a while, Herbert said.

“I think she got herself worked up more than anything last time.”

“She is a moody mare, basically.”

“Today she was actually not too bad for her.”

Taumata VC is owned by Herbert’s uncle Doug and his children Joey and Kimba.

Herbert made it back to back wins when Hello Adele produced a gritty effort to take out race 5.

The Philip Beveridge trained mare was caught wide early before eventually getting to the parked position and then into the one-one.

Normally considered a sit-sprint type, the five-year-old shrugged off her early work when proving too tough for her rivals.

“For a sit-sprinter, she did a bit of work, we were pretty blown away,” Herbert said.

“She was unlucky at Westport and at Reefton it was a funny one because the two in front got away on her and she was never going to beat them.”

“I was hoping she was going to be in the first three, but I wasn’t expecting her to go that good today.”

Sunday’s double was Herbert’s first since she won with the Paul Kerr trained duo of Pascale Bromac and Speed Monster at Rangiora in April of 2003.

Kerr also got in on the winning action at Motukarara on Sunday when producing Duffy Hollow to win race 11 with Tim Williams in the sulky.

Cameron doubled up for the first time in his short career when Manjimup scored a tough win in race 7 and Not Really Blonde produced a late surge to take out race 8.