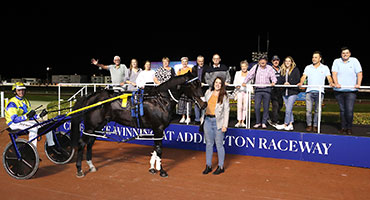 Some people are born into racing. Others, like former Crusaders and Hurricanes halfback Tyson Keats, marry into it.

And for someone who says he "doesn't know much" he's now getting involved at various levels of the sport.

After marrying the then Chelsea Jones, Keats found himself part of the extended Jones clan, one of racing's most famous families. 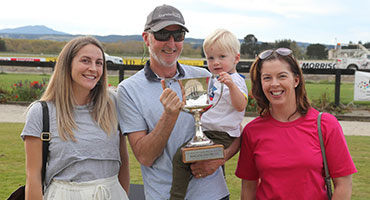 His in-laws are Derek and Adele Jones, who have recent success with the likes of open class trotter Majestic Lavros and Rangiora Winter Cup winner Kiss The Girls (Chelsea and Derek are at left of photo). Earlier this year they also sold an Elusive Chick - Bettor's Delight colt for $210,000 at the NZB Yearling Sales.

"They call Derek the horse whisperer - he's been having a great run," says Keats, "you wouldn't meet a nicer bloke."

Keats has had interests in a number of horses over the years including seven race winner Nui Ba Den who's since headed to North America.

Right now he is one of six that own three-race winner Moody River, trained by Matt Purvis, and has a small share in Swagger Man along with high profile owners such as Philip and Glenys Kennard and Peter Baken. Swagger Man broke his maiden status three starts back at Addington at start number seven.

Keats got into the horse through Swagger Man's trainer-driver David White, a close family friend of the Jones'. Keats is also good mates with Methven Trotting Club president Carl Markham who is White's father-in-law. White is married to Markham's daughter Stacey. 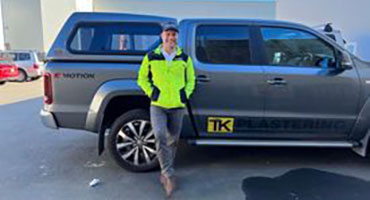 Keats' involvement in racing doesn't stop there. His company TK Plastering has been sponsoring races and soon will have a permanent hoarding at Addington Raceway.

"It's just down the back straight... we sponsor a few things, it's always good to give a little back."

TK Plastering is Keats' exterior plastering business. While based in Christchurch he has expanded to Wellington and Central Otago and has 30 staff members on the books. 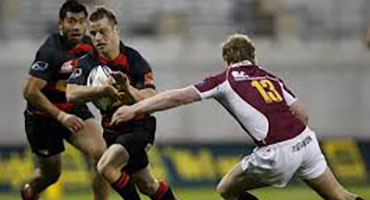 During his playing days Keats attracted a fair bit of media attention as the part time plasterer - part time rugby player. He's a chatty cheeky character, as many halfbacks are. Long-time team-mate and fellow halfback Andy Ellis also has an interest in harness racing, as a part owner of horses like Lifes A Beach and Monaco Grace and he was also a part owner of millionaire trotter Speeding Spur before he was retired to stud.

Keats was in the Canterbury team that won back-to-back NPC titles in 2008 and 2009, before playing 24 games of super rugby for the Crusaders (3) and Hurricanes (21).

On moving to Wellington he sold his business, only to set up his own company again in Christchurch in 2014 after rugby playing stints at Aironi in Italy and at London Welsh.

A member of the New Brighton Rugby Club since he was a nipper, Keats is now 40 and says his rugby playing days are over.

"I played for New Brighton Div 3 last year but my knees are done .. it was just a few cameos."

These days golf occupies some of his leisure time - "I play off a 12 to 14" - at the Waimairi Beach club.

He also enjoys going to the races and seeing his horses up close.

'And I like a punt but I just pick them on names," he jokes, "and I like outsiders."

Canadian owner Mike Tanev has confirmed his star filly Aardie's Express will race exclusively from New Zealand, and not head to North America.