Fitzgerald out to make a difference 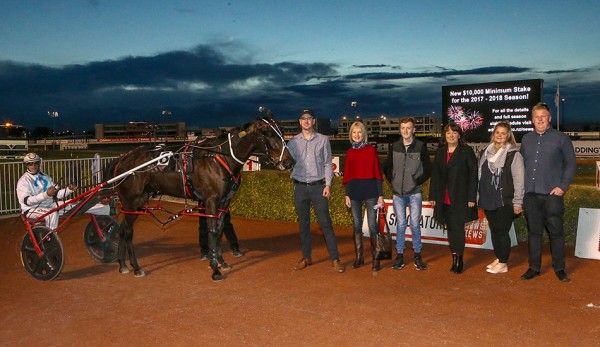 Passion is the word that comes to mind when you think of Andrew Fitzgerald. Passion for the sport he loves.

He has been involved in many parts of the racing industry in a bid to grow the sport and currently finds himself at the helm of Off N Racing – a brand he started up firstly to help promote racing and to help trainers start up social media platforms.

But now the brand is expanding into ownership and not only horse ownership, there are a couple of greyhounds on the book too.

It was roughly four years ago when Fitzgerald found himself at a bit of a cross roads in the industry and thought he wanted to make a difference, so he set up Off N Racing which then was focused on social media.

“There weren’t too many trainers on social media, it’s taken a few years but most are using it now and realise it’s actually the best and cheapest advertising platform available for your business,” says Fitzgerald.

But that’s not all that Off N Racing is running; Fitzgerald also looks after content creation & social media for race clubs such as Nelson Harness, Westport Trotting Club, Wyndham Harness & Gore Harness Racing Club's. This has also led to managing McDonald Bloodstock Limited who own Terror To Love.

As well as wanting to help the industry to improve its marketing and promotion Fitzgerald has also started to promote and bring in new owners.

In fact he had a quick count up the other day and has 53 new owners who have come into horse ownership in the last six weeks, of this number roughly 75% of these are owners that have never owned a harness racing horse before.

The owners are spread between three horses that Off N Racing have recently purchased; Kaka Point Galanty, The Naenae Express & Eyecon. The latter will be trained by Fitzgerald himself.

“The long term plan is to have horses with all my social media clients, as well as supporting the young guys like Jonny Cox/Kimberly Butt, Craig Ferguson, Brad Williamson, Dylan Ferguson and Sam Payne. They've all supported me in one shape or another over the years, so my goal is to return the favour I guess you could say and work closely with them to help build their ownership groups and stables.”

You might think that between managing the social media pages, training horses and organising ownership that Fitzgerald has quite a bit going on but that hasn’t stopped him also reaching into the Greyhound market.

“The Greyhound venture came out of the blue, over the last year I've had a number of messages from clients in regards to syndicating them, so one day I was chatting to Andy & Janine McCook and they mentioned that PuntersHQ had a number of dogs with them and they'd help out.”

Help out they did and Fitzgerald now races four dogs under Off N Chasing – his Greyhound racing brand.

“We had five winners in the first week and all four dogs are pretty handy. The best one looks to be Jocelyn, she's won 2/3 and Janine has big wraps on her,” says Fitzgerald.

So what now for Fitzgerald? “I have an ambition to get to 250 individual owners by Christmas time. Currently we're 20% of the way there but I've got a few plans up my sleeve to reach that target.”

Fitzgerald wants to see new ownership help with turnover and seeing that new people are betting on the sport and attending race meetings.

So how can you become involved?

Facebook Page: https://www.facebook.com/OffnRacingNZ- from there you can join the exclusive ownership group where you are given first dibs at any new horses.
Or head to the website www.offnracing.co.nz to browse the horses and find out more.

We have recently received a number of enquiries from people interested in owning or leasing a race horse.

Owners night back – and popular

A sell-out’s expected for Addington Raceway’s Owners’ night on Friday May 14.