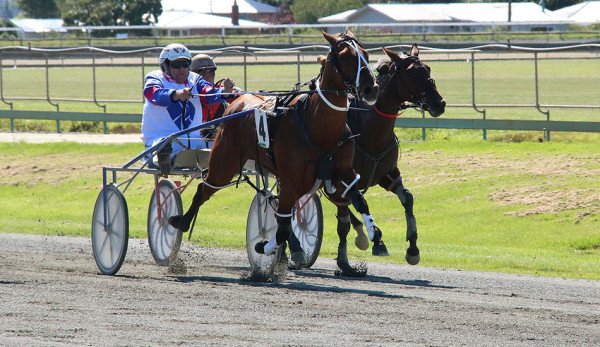 Ferguson was with McCall and his fellow groomsman en-route to the wedding venue when he watched his filly speed to victory in the 2200m feature on his cell phone.

Patchy phone coverage meant he could only watch parts of catch-driver Nathan Williamson controlling the race in front with his first starter in a black-type event.

But thankfully there were enough bars on his phone to let Ferguson enjoy one of the biggest thrills of his career when Nutcracker passed the post.

“I managed to see it, I watched it on my phone,” Ferguson said.

“The reception was cutting out, but I managed to see them cross the line, so that was good.”

“I certainly had no trouble smiling for the wedding photos and it set up a big weekend.”

Having to watch a horse he trains on his phone, rather than from the sulky put Ferguson in what would be the rarest of positions for any accomplished reinsman.

He admitted it was unusual, but not without a few perks.

“There were no nerves, I just had to sit back and watch it unfold,” Ferguson said.

“I didn’t have to worry about driving or anything, so it was quite unique.”

Ferguson has a Group 1 placing at the Harness Jewels with Robyns Playboy and the Wrath Of Robyn’s victory in the Group 3 Dunedin 4&5YO Championship on his driving resume.

To win a Group 3 event with his first starter as a trainer rates as highly as any of his accomplishments in harness racing.

“It is probably the highlight, really,” Ferguson said.

“To train one to win a race like that was pretty cool and to do it on debut was quite satisfying.”

Ferguson managed to give Nathan Williamson some payback through their win with Nutcracker.

Williamson has put Ferguson on Dark Horse in two starts recently and she has managed to win twice.

On Saturday their roles reversed.

“It was a great drive and it was the drive that won the race, really,” Ferguson said.

“Nathan was pretty happy with her, he said she did it pretty easy and she just did what she had to do.”

Ferguson and Nutcracker’s owner-breeders Paul and Brendan Duffy have a potential Harness Jewels starter on their hands with their filly currently ranked fourth in qualifying for the 2YO Diamond for two-year-old fillies.

The race is on the filly’s agenda so Ferguson will now work on how to progress there.

“She has got a bit of money now, so she is certainly in the mix for the Jewels.”

“We will just have to sum it up and see where we go and what happens.”

It is far from out of the realm of possibilities that the Duffys have two Jewels-eligible horses.

Nutcracker is a full sister to Yorokobi, who showed he could foot it with New Zealand Derby favourite Ragazzo Mach when narrowly going down to him in his last start at Winton.

Freshened since that December race, the Regan Todd trained three-year-old has trialled twice ahead of his return in Friday night’s Johnny Globe Stakes, an automatic qualifying race for the New Zealand Derby.

There, he will again square off with Southland superstar, Ragazzo Mach.

Yorokobi is currently ranked just 25th in qualifying for the Harness Jewels 3YO Diamond for three-year-old colts and geldings but will get plenty of opportunities to improve that in the coming weeks.