Feiss filly to the fore in Auckland Classic 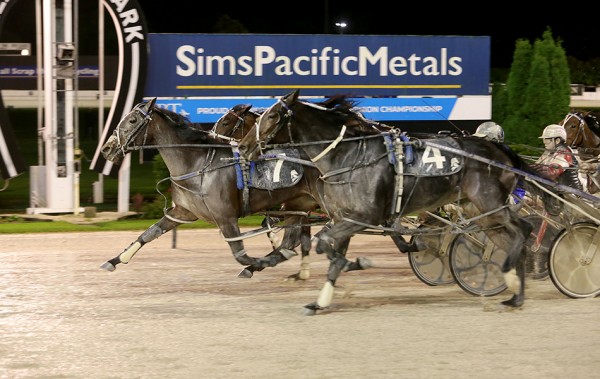 Jean Feiss is starting to make the Gr.1 Caduceus Club Fillies Classic (2200m) her own.

The Australian-based owner has now won four of the last six editions of the race after True Fantasy ran home late to capture the feature fillies classic at Alexandra Park on Friday night.

The Hayden Cullen-trained juvenile was taken back to the rear of the field from her wide draw where driver Mark Purdon sat patiently throughout.

He asked True Fantasy to improve three-wide on the back of Chevrons Bypass down the back straight before producing his charge five-wide turning for home.

The daughter of Bettor’s Delight was able to showcase her turn of foot in the slushy conditions and score a half-neck victory over Montana Glory, with a further head back to Dance Till Dawn in third.

Cullen was impressed with True Fantasy’s performance and was full of praise for Purdon’s tactics.

“It was a really good drive by Mark,” Cullen said. “I thought it was very patient and they were running along enough early. She came home really well.

“It’s probably the first time she has raced on a track like that, but it didn’t seem to bother her.

“The draw was going to be the difficult thing, but we certainly knew the ability was there.”

True Fantasy now boasts a record of two wins and a second from three starts and looks the one to beat in next week’s Gr.1 Magness Benrow NZ Sires’ Stakes Filles Championship.

“She is a lovely filly and from her first start to her second start she made a big improvement, so her performance on Friday didn’t surprise us,” Cullen said.

“She will go again next week in the Sires’ Stakes Final and then the Harness Million the following week, and the Jewels after that, all going well.”

The Feiss-owned Amazing Dream also featured prominently in the Gr.1 Taylor Mile (1609m), running home late to nab fourth, behind Copy That, off a hot speed.

“I thought she went super, they got home in 26.7 and she was making ground on them,” trainer Hayden Cullen said. “She will probably be more suited to the Messenger next week.”

Meanwhile, stablemate Oscar Bonavena made a pleasing return to the Group One ranks when running third behind Sundees Son in the ANZAC Cup (2200m).

The Majestic Son entire was given a beautiful trip in the trail by driver Mark Purdon and stuck on well to secure third position.

Off the racing scene for more than a year after a bone chip was found in his knee following an Australian campaign last year, Cullen said he is taking time to regain race fitness, but believes he will take a lot of improvement into next week’s Gr.1 Canam Rowe Cup (3200m).

“He looks like he is on the come back now,” Cullen said. “It was a nice run for him, he didn’t do a lot of work. It shouldn’t have taken too much out of him.

“He’s taken a big improvement from every run he has had. His fitness is slowly getting there, he is not 100 percent yet, but that run would have tightened him up again nicely.

“It’s what happens when they are out for such a long time these older horses. It just takes a few runs for them to get their fitness back again, he is getting there.”