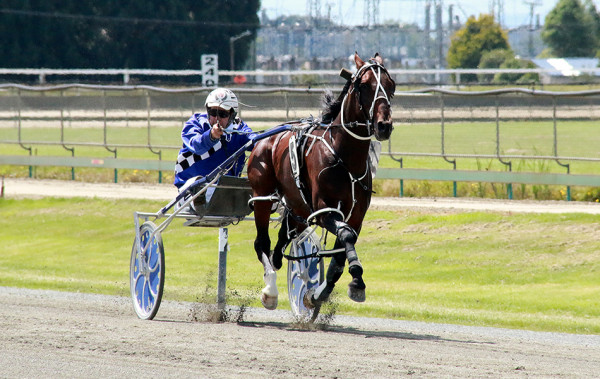 A smorgasbord of New Zealand’s elite races awaits Pembrook Playboy following his standout win in the Invercargill Cup on Saturday.

Trainer-driver Nathan Williamson revealed his plans for the classy four-year-old after he produced brilliant closing splits to seal a sizzling win in the group 3 feature.

Williamson effectively had one hand on the Invercargill Cup trophy less than 100m after the start of the race after Pembrook Playboy made a clean beginning to maintain the head-start he had on his rivals from his 10m handicap.

“It worked out real well, I was rapt with the way it worked out,” Williamson said.

“He began well and I was able to get a nice run there and work around to the lead and then he zipped home pretty nicely.”

Williamson will now set his sights on Addington with Pembrook Playboy and attempt a hat-trick of wins group race wins in the Summer Cup on February 12.

A line up of some of New Zealand’s elite Group One race then awaits the exciting four-year-old.

“I will take him to the Summer Cup which is in a fortnight,” Williamson said.

“Then he might have a few easy days and then we will set him for the Northern Southland Cup, which is down here in March.”

“Following that the plan is to take him through to Christchurch for the Superstars (Championship), free-for-alls and the Easter Cup even might be an option.”

“And then obviously the end of the season finishes off with the Taylor Mile, the Messenger and the Jewels.”

“So, he has got a big programme ahead of him.”

Pembrook Playboy had his first taste of top level racing when fifth in the Junior Free-For-All at Addington on Show Day.

When the pacer returns for the Summer Cup he will be a stronger and more potent horse.

“He is handling his racing good.”

“He has definitely got gotten stronger since Cup Week and he is really bouncing through his runs.”

Pembrook Playboy’s Invercargill Cup win has come in the lead up to the NZB Standardbred National Yearling Sales.

Williamson spotted the then yearling colt in the lead up to the 2018 sales and landed him for what now looks to be a bargain price of $27,000 for owner Chris Alcock.

“A Bettor’s Delight colt out of a Group One winning Christian Cullen mare, we felt we might have to spend a bit of money and we ended up getting him well.”

Williamson said the way Pembrook Playboy moved was what really caught his eye before he went into the sales ring.

“He is a lovely moving horse, that is the real reason why I liked him.”

“He has a bit of arrogance about him, but he is a lovely moving horse and subsequently he is a beautifully gaited horse.”

Pembrook Playboy held out a game runner-up in Thefixer by a length and a quarter at the finish.

Thefixer charged in to second on the race’s fast closing splits in an excellent performance from his 30m back mark.