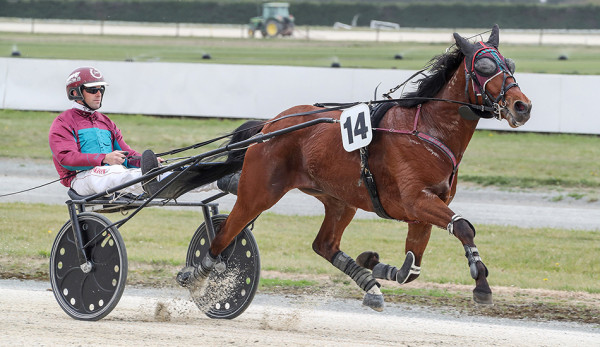 Enigmatic trotter One Over All has given trainer Gavin Smith a fair few headaches, but his patience was rewarded at Timaru on Sunday.

After initially coming away in gallop from the second line in the Morrison’s Saddlery & Feed Trot (2600m), One Over All quickly settled and was sent forward to take an early lead for Smith.

From the front Smith was able to dictate terms throughout and One Over All distanced his rivals in the straight to win effortlessly by eight lengths.

Smith was pleased with the win but admitted is patience has been worn thin with the son of millionaire trotting mare One Over Kenny.

“I was just trying to keep him as settled as much as I possibly could on Sunday. If he settles he is very fast, but he doesn’t settle very often.”

The three-year-old gelding finished runner-up in his last start, but Smith said he was still doing a lot wrong.

“He was pretty good at Oamaru. He was good the first lap and then the last lap he lit up pretty bad and pulled hard,” he said.

“Pulling for one lap left him with a little bit at the end instead of pulling the whole way like he can do.”

Smith has been trying everything he can think of to try and counter One Over All’s pulling tendency and he thinks he may have found the answer courtesy of his former employer David Butt.

“Every time I have changed something and he has been good, the second time we have done the same thing he has been horrific. I haven’t been able to find the key yet and I have been tearing my hair out.

“I borrowed Davey Butt’s screen cart and working behind a screen so we can let him go and not fight him every second day.

“He has raced better since we have had that, so we have got the engineer building one now.

“That’s all I can put the form difference down to at the moment.”

One Over All’s dam won the Gr.1 Northern Trotting Derby (2700m) but Smith said his charge will need to improve a lot mentally in order to tackle some of the three-year-old mobile features later on this season.

“He has got the family ability, but unfortunately the brain just doesn’t compute sometimes. He is not a silly horse, he is quiet, but will just snap and bolt,” Smith said.

“He was losing is marbles in the mobiles in his first couple of goes this year, so we are going to stick with standing starts for a while and just see.”

Later on the card at Timaru Smith picked up a driving double when steering the Trent Yesberg-trained Kusanova to a nose victory in the Equine Veterinary Services Pace (2600m).

“She is a nice, handy horse who is heading in the right direction and is getting better each start,” Smith said.

“She got a bit lost in the big straight at Motukarara (last start), she hit the front way too soon and it wasn’t until the other horse joined her wide out that she got going (and finished second).

“The addition of pull-down blinds on Sunday helped her and she ran hard right to the line.”