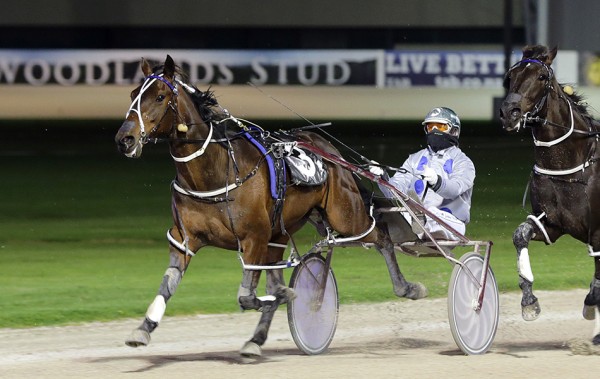 Dickie reined Major Jellis to upset heavily-backed stablemate Bad To The Bone and Copy That in the $25,000 Kerry Hoggard Memorial Holmes D G in a career-best performance from the winner.

It was one that meant so much to Dickie as it was Hoggard, the late president of the Auckland Trotting Club, who helped Dickie and his father John get set up in Auckland from Hoggard’s wonderful property.

“Kerry and Marilyn (Hoggard’s wife) were great to us so to win a race named in Kerry’s memory really means a lot to me and I hope it did to Marilyn watching at home too,” said Dickie.

The win was a timely reminder of Dickie’s driving skills as he took the initiative at the 1400m mark to attack for the lead after sitting three back on the markers, then handing to stablemate Bad To The Bone and beating him up the lane.

Copy That was a solid third in a good time after being dragged into a one-one position but on the whole the race wasn’t one likely to scare the connections of the favoured IRT NZ Cup chances in the south.

Major Jellis won’t head to the Cup, sticking to Alexandra Park racing instead, but Bad To The Bone will be on a transporter to Canterbury on Monday for the Kaikoura Cup the following Monday.

“He was good tonight because he was a long way back at the mile and had to run hard to get the lead,” said Phelan.

“So he will head to Christchurch on the float with Montana D J.”

The latter led and was second to stablemate Major Perry in the Sires’ Stakes heat on Friday, the pair now both safely into the Cup day final.

“Montana D J was a lot better tonight but Major Perry might be the quicker at the moment so we are lucky to have two good horses for the big race.”

Major Perry may well stay in Auckland an extra week and fly down on a plane scheduled for November 4, which could also contain Copy That.

“We hear there is a plane going that day so we will wait for that and miss the Kaikoura Cup,” says Copy That’s trainer Ray Green.

“I have applied to go down but can’t get an exemption so the horse flying down later makes sense,” explains Green.

“It means I can work him that morning and then he will travel down and stay with Ken (Barron) and Blair (Orange) and they can keep him ticking over until the Cup.”

The other highlight of Friday night’s programme was exciting juvenile filly Lady Of The Light remaining unbeaten at her third career start rating 1:55.8 for 1700m beating some smart older mares for trainer Jeremy Young.