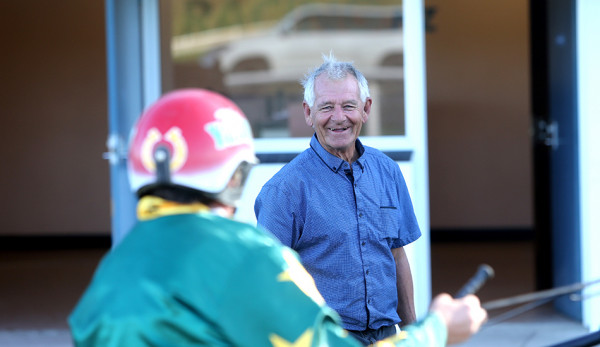 Alan Edge had his horses ready to win and Ken Barron wound back the clock when the pair combined for a winning double at Ashburton on Tuesday.

Barron reminded racegoers why he earned the nickname ‘The King’ on his way to becoming one of New Zealand’s elite reinsmen with pinpoint winning drives behind the Edge-trained Edge Sheeran and Off The Edge.

Edge Sheeran was followed across the line by Bolzano, who rounded out a nearly perfect day for his trainer with his third placing.

“It was a great thrill to win two and get a third,” Edge said.

A short-lived retirement from the sulky and having Blair Orange to drive his team has seen Barron take less than 60 drives in the past two seasons.

A long association between trainer and driver led to Edge calling on Barron to drive his runners at Ashburton and show he had lost none of his 1000-race winning skill.

“We work in together a bit,” Edge said.

“He breaks a few in for me and if I have got horses I am worried about I send them up to Ken.”

“He straightens them out and sends them back home.”

Edge and Barron notched the first leg of their winning double when Edge Sheeran surprised punters by winning race 2 at $33 odds.

Barron landed a nice spot in the running line for the five-year-old who thrived a hot 2-57.2 speed for 2400m.

“He is a nice enough horse, he travels the speed,” Edge said.

“He is not a sit and sprint horse, the faster they go the better he goes.”

Off The Edge also surprised punters when winning race 10 at a $22 win price.

Edge was a little disappointed after drove the horse to run second in an amateur driver’s race at Roxburgh in his last start.

Gear changes after that race had an immediate effect on Tuesday.

“I thought he should have won at Roxburgh.”

“But with a couple of gear changes from Stevie Noble my stable foreman, he performed really well.”

Edge has a decent opinion of Off The Edge and hopes the horse can continue his good form after being handled patiently following his first start in September of 2019.

“Off The Edge has been underrated.”

“He raced Italian Lad when he had his first start and he dragged him into the race when they went a track record at Oamaru.”

“We have waited a bit of time for him, but we rate him.”

“When Jonny Cox won on him at Forbury he was seven wide round the bend.”

“He is a tough little bugger, he is only the size of a pit pony.”

Barron split his wins with Edge’s pair with a victory behind Longview Lady in race 6.

His winning treble was the reinsman’s first since driving Dreamlover, Whyamibettor and Captain Webber to victory at Timaru in February of 2013.