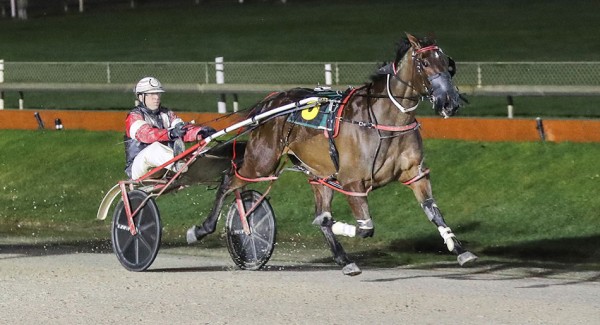 Harness racing fans shouldn’t expect Jenna Dunn to make the most of her time in the spotlight following her move into one of the most powerful positions in New Zealand’s training ranks.

Dunn made a brilliant start to her official training career at Addington on Friday night producing Somekindawonderful and Chief Of Staff for victories on her first race night.

Training such a high-profile team that includes Horse Of The Year favourite Sundees Son has effectively propelled Dunn into the spotlight.

The horsewoman admitted that’s not something she is entirely keen on as she prefers to work away quietly and focus on her horses.

That means if a feature race speech needs to be made in what is set to be another huge season for the Dunn barn it is almost guaranteed Robert will be taking the microphone.

“I am not the sort of person for the recognition, I like being in the background,” Dunn said.

“I don’t like being up front and centre because it is just not me.

“It's Johnny and it's the whole team, everyone deserves that recognition.”

“I’ll let RJ do the interviews and things like that, he is good at that side of things.”

“I said to him you can do that stuff and I will look after the horses.”

Dunn may only have two official wins to her name but she has had a hand in the training of dozens more winners through her extensive work with Diamond Racing.

The two-time premiership winning stable must rate as the most tight-knit family operation in New Zealand.

Dunn has her father Craig Edmonds and sister Aimee to work alongside as well as her brother-in-law Tim Williams.

With John and Robert Dunn and her son Jacob among the team it is a big family team that is supported by more staff.

While most families might have more than the odd argument in that kind of environment the Dunns and Edmonds clearly thrive while working together judging by their results.

“It is a big help having all the family there with Dad and Aimee and RJ and Johnny,” Dunn said.

“It is really good having that family environment.”

The four-year-old enjoyed a perfect run in the trail behind the favourite Sugar Me who was tested in the middle stages.

Once clear Somekindawonderful scorched along the passing lane for a deserved win.

Chief Of Staff unusually trotted roughly and galloped early before settling around 12 lengths behind the field in last in the early stages of his victory.

The break wasn’t enough to stop the seven-year-old and in the end it set up a highly impressive win.