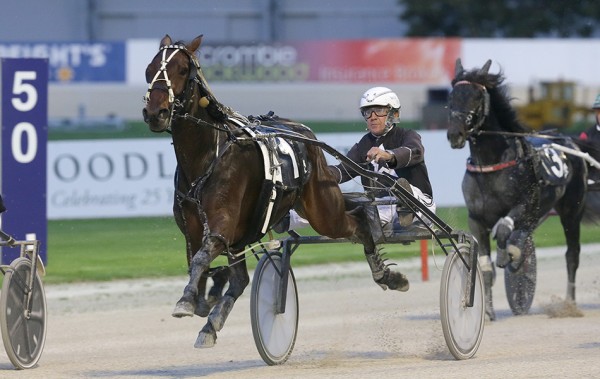 Every yearling buyer dreams of their latest purchase eventually winning on debut.

Tony Herlihy just didn’t think if that dream came true with Double Delight it would be in a trotting race.

The two-year-old trotting filly showed great determination to win her first start at Alexandra Park on Friday night and while the result itself didn’t surprise Herlihy the type of race sure did.

Because he paid $40,000 for Double Delight at the yearling sales last thinking he was buying a lovely pacing filly prospect by exciting pacing stallion Captaintreacherous yet Double Delight trots.

Herlihy is surprised as anybody else.

“I tried to break her in as a pacer about three times,” laughs the champion horseman.

“But all she wanted to do was trot. She was even trotting inside the hopples.

“So eventually gave up and we let her do what she wants to do and she does it pretty well.”

Captaintreacherous was of course a champion pacer and Double Delight is his 14th winner bred in New Zealand, whether they have won here or in Australia, but his first trotting winner in this part of the world.

“Obviously this isn’t what we expected but she has hardly put a foot wrong trotting so I am happy to be proved wrong,” says Herlihy.

Double Delight is now qualified straight into the Jewels, leaping to fourth in the leaderboard after just one start.

Herlihy will also have his more trotting-bred trotter Bolt For Brilliance at the Jewels, having given the four-year-old a few days off after his brave second to Sundees Son in last week’s Rowe Cup.

“I was very happy with him, how couldn’t you be, trotting home in 55 seconds again so he is definitely going to the Jewels.”

Herlihy made it a juvenile debutant double when Blameitonthenight was a dominant winner of the night’s pacing race while later in the night Melanion came from well back to win his debut to give The Iceman an ultra-rare debutantes treble on the night.

After being allowed to find her feet early Blameitonthenight raced around to sit parked and recorded a 1:56.2 mile rate for the 1700m and she too now finds herself in the top 12 on the leader board for the two-year-old Diamond after just one start.

Blameitonthenight is bred to win a Jewels, being by Bettors Delight from 2009 two-year-old Diamond winner Gotta Go Harmony, herself of a daughter of one of New Zealand’s great fillies in Elect To Live.

Melanion is a three-year-old son of Bettors Delight and he also had to be good to win pacing 2:41.9 after getting well back in a disorganised race.

While Herlihy trained a pacing-bred trotter to win among his treble on Friday night, the north’s top trainers of trotters had a rare pacing winner.

Blitzembye lived up to trainers Michelle Wallis and Bernie Hackett’s big opinion of him to storm home breaking 54.5 for his last 800m and if that official time is right he may well be a horse with a big future.

He is the only pacer racing in the stable with 20 trotters and it was one of those, Majestic Princess, who won the very next race on debut to give the Wallis/Hackett stable a running double.

Some people are born into racing.  Others, like former Crusaders and Hurricanes halfback Tyson Keats, marry into it.