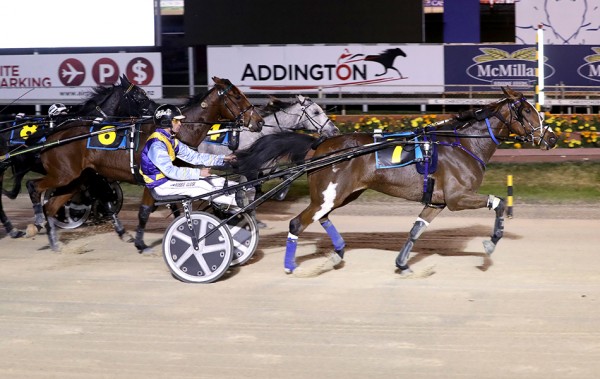 Splash Cola may be a rising 11-year-old, but she is not showing any signs of slowing down.

Driver Robbie Close urged her forward early from her wide gate to take and early lead before handing up to Pres The Belle.

She enjoyed sitting in the trail until Close elected to get on the back of an improving Gold Chain at the 400m and she was able to wear down her rival in the straight to win by 1-1/4 over a fast-finishing Overzealous, with a further half-head back to Gold Chain in third.

It was a month between runs for Splash Cola after her unplaced run in the Gr.1 NZ Trotting Championship (2600m) and Todd said she was working well in the lead-up to Friday.

“It was still a hard race, but it was a bit of a drop back from racing against the likes of Sundees Son,” Todd said.

“She worked well during the week, so I thought she would be a bit of a show.”

The daughter of Sundon will attempt to add to her career tally over the winter months before the broodmare paddock awaits her in the spring.

“We will keep racing her through the free-for-alls during the winter and then she will head to the broodmare paddock,” Todd said.

Todd picked up a winning double at Addington when Haiti Franco was victorious in the following race, the Lamb & Hayward (Junior Drivers) Mobile Pace (1980m).

It was the four-year-old mare’s second consecutive win and Todd admitted he was unsure how she would handle the step up in grade on Friday.

“She was heading into the unknown, it’s a big step up from the maidens,” he said. “But she got a good run and went well.

“It was penalty free so you would like to think that she will get another win or two during the winter.”

While winter racing is fast approaching, Todd is still looking forward to a few feature races in the last few weeks of autumn before he heads north to Cambridge Raceway for the Harness Jewels next month.

He currently has three runners qualified for the Jewels at various levels in the standings in their age divisions.

His trio is led by last start Gr.2 Southland Oaks (2700m) winner Bettor Talk Art, who will contest the Gr.1 Nevele R Fillies Series Final and Gr.1 The Breeders NZ Oaks this month ahead of the Jewels.

Stablemates Yorokobi and Play Philly will also have another hit-out each before a decision is made about whether they head to Cambridge.

“Yorokobi will probably have another start next week to keep the money ticking over,” Todd said of the gelding who is currently 12th in the 3YO Emerald standings.

“And Play Philly will race at Cambridge on the 20th and then we will make our mind up of whether we press on to the Jewels or she goes to the paddock. She will go a lot better going back to left-handed.”