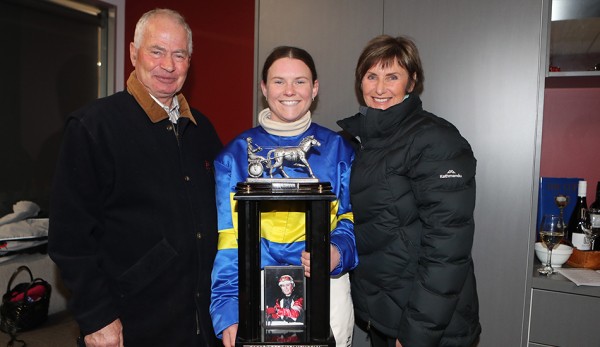 The talented reinswoman recorded a double at the final southern meeting of the season, including the coveted Darren Defilippi Memorial Handicap Trot (2600m) behind Fighting Fire.

The erratic trotter was fractious at the start but once underway he was strong in his gait and O’Reilly pressed forward with the Paul Kerr-trained gelding until they found the lead down the back straight.

They maintained their advantage throughout and scored a one length victory over Boyz Invasion, with Luminosity a neck away in third.

“He was playing up at the start, so I was a wee bit worried, but once he was moving forward he went into stride and was perfect from there on,” O’Reilly said.

“He relaxed well in front and was travelling nicely on the bit. He was too tough for them.”

Fresh off her victory in the New Zealand Junior Drivers Championships, O’Reilly was delighted to take out the Darren Defilippi Memorial, a cherished race in the junior driver fraternity.

“It’s pretty special because everybody wants to win this race as a junior,” O’Reilly said. “They had a great field tonight and it was great to see all the other juniors out there all having a go for it.

“It is something that I will always treasure.”

Later on the card, O’Reilly secured a double for the meeting when reining home Sugar Me to back-to-back victories in the Unsung Heroes Mobile Pace (1980m).

“I didn’t want to be stuck on the fence like last week because that run probably wouldn’t happen twice in a row, so I came out to see what he has really got,” O’Reilly said.

“I thought he was getting a bit tired, but I just tapped him up and he found another two gears up the straight. I thought it was a tough win.”

O’Reilly has been proud of her efforts this term, particularly with her strike-rate, having had 300 fewer drives than Morrison.

“I was 15 wins or so behind him at one stage, so it has been a great effort to get as close as I have,” O’Reilly said.

“I am pretty proud of myself. I have had a lot of support from a lot of trainers and owners as well, so it’s great that I can get the results for them.”