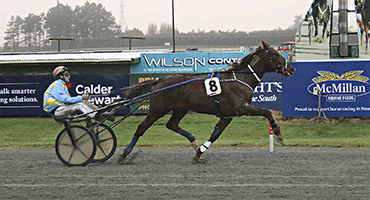 Northern reinsman Josh Dickie has landed the sought after drive on trotting star Ultimate Stride ahead next month’s most anticipated match up in trotting.

A suspension has forced regular driver Matthew Williamson out of the sulky behind the blueblood squaregaiter in the first of his two epic clashes with Bolt For Brilliance and Cracker Hill.

Ultimate Stride is staying at Dickie’s property leading in to the Sales Series Final for last season’s 3yr-old trotters on October 9, which has already led to the horse getting some special treatment.

“Josh said he was quite thrilled to be driving the horse,” trainer Phil Williamson said.

“And he said he has put him in his number one box, too.”

Ultimate Stride travelled north alongside Cracker Hill over the weekend.

Both horses have been under the care of Cracker Hill’s trainer Brad Williamson since leaving Oamaru.

With a trip to Australia already under his beat, Ultimate Stride is a seasoned traveller and arrived in Auckland in excellent order.

“He has arrived in Auckland 100%,” Williamson said.

“We just took a blood [test] off him to check he has arrived fit an well and he hasn’t got any bugs or anything.”

“Safely through a good report on that I will trial him at Pukekohe on Friday.”

As most would expect from a Williamson trained trotter, Ultimate Stride has been well-schooled ahead of his right-handed debut at Alexandra Park.

He and Cracker Hill both had a private workout at Forbury Park going in the Auckland direction before leaving the South Island.

Ultimate Stride’s clash with Cracker Hill and Bolt For Brilliance is being talked up as the most anticipated clash not just in trotting, but across each gait and age group, so far this season.

It is easy to see why, with Ultimate Stride remaining unbeaten since returning from injury following his two group 1 wins in Australia last year.

In his injury-enforced absence for much of last season, Cracker Hill dominated his 3yr-old rivals in the South Island.

The anticipation ahead of the two Oamaru trotters heading north hit a new level on Friday night when Bolt For Brilliance smashed the allcomers national record for a 2200m stand at Alexandra Park.

Williamson admitted taking on the Tony Herlihy trained star will be no easy task for Ultimate Stride.

“Bolt For Brilliance is a very good horse and he deserves to be the favourite right now.”

“And he has beaten Temporale, who has won a Rowe Cup and is pretty good over sprint trip.”

Matthew Williamson will reunite with Ultimate Stride when he clashes with Bolt For Brilliance and Cracker Hill for the second time in the Sires Stakes Final at Alexandra Park on October 23.

The trotter will then head back to Oamaru with the hope he can start in the Dominion.

Ultimate Stride’s $4 odds in the race’s fixed odds market might suggest he is highly likely to start in the event.

However, Williamson has a warning for punters.

“The punters should be careful because of his ranking.”

“We have to be away for these races in Auckland and they are not qualifying races for the Dominion.”

“So, it is going to be hard to move his ranking up and there is a chance he could miss out.”

Ultimate Stride was ranked 20th when the order of entry for the Dominion was released last week.

The first three horses home in the New Zealand Trotting Free-For-All on New Zealand Cup Day are guaranteed a start in the 3200m feature.

Williamson said Ultimate Stride could head to the group 1 event to qualify, but it may not be ideal for such a young trotter to do so and race in the Dominion just three days later.