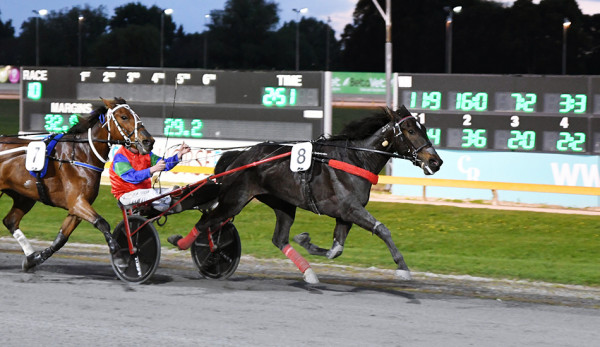 The horse labelled with the biggest heart in Graeme Rogerson’s barn was finally rewarded with a win at Cambridge Raceway on Sunday.

Splitting Image has gone through plenty of trying times throughout her career and Rogerson’s stable foreman and driver Dylan Ferguson was rapt with her one length victory in the Off Road Sponsors Driver Prize – Nov 6th Trot (2200m).

“She has got the biggest heart of any horse we have got and there is no horse in the stable that deserves to win more than she does,” Ferguson said.

“If people knew the troubles she has had in her life they would be amazed that she is racing let alone winning.”

Bred and raced by her trainer in partnership with his granddaughter Bailey Rogerson, and Merv and Meg Butterworth, the mare’s struggles began well before Ferguson returned to the Hamilton stable.

“Before I started at Rogies she had surgery on one of her knees, which was more to save her as a broodmare than a racehorse,” Ferguson said.

“There was a lot of work from the previous staff and the vets. When I started back working there we put in some long hours with her and she was in work for a long time before she started racing again.

“Those problems have created other problems since she has been racing.”

Those issues still plague the five-year-old who was only cleared to race on Sunday morning.

“Right up until this week she has had a bit of trouble with one of her back hooves,” Ferguson said.

“I only got the shoe back on her on Sunday and jogged her in the morning to make sure she was going to be alright to race.

“She is definitely not the soundest horse in the world, but she has got the biggest heart. That takes her a long way.”

Splitting Image is now in-foal to Majestic Son, but Ferguson is hoping she can add to her three-win tally before heading to the broodmare paddock.

Earlier in the night Ferguson was pleased to see talented but erratic trotter Delson trot the entire 2200m journey of the John Deere Cambridge Hanidcap Trot to finished runner-up by a head to Griffins Hall.

“It was good to see him do everything right and go well,” Ferguson said. “I don’t think he could have gone much better first-up with no trials, but once he has done it a few more times I will be a bit happier.”

Ferguson’s partner Jo Stevens will have some bragging rights in their household having trained the victor, with Ferguson’s father Peter doing the steering.

“Griffins Hall is a trotter that is in form at the moment and when trotters are trotting well and doing things right they generally can hold their form for a while,” he said.

“But it was a good effort from Delson from 40m behind. To trot 2:47.1 first-up with no trials reminded us that he does have ability.”

If he continues to improve this preparation, Ferguson is eyeing some loftier targets with the six-year-old gelding.

“We are going to head back to Cambridge in a fortnight,” he said. “We would like to head back to Auckland at some stage and race for a bit better coin. If he is going well he will hopefully race in the Christmas features at Cambridge and Auckland.”