Copy That brilliant at Ashburton 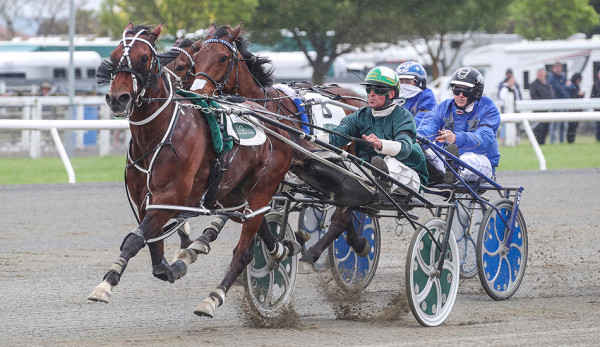 Copy That went into beast mode to reel off stunning sectionals to win the Ashburton Flying Stakes in what a perfect dress rehearsal for the New Zealand Cup on Monday.

The Ray Green trained four-year-old set the Ashburton track alight when unleashing a scorching 25.2sec last 400m to bolt in in the most important lead up to the country’s greatest race.

After making a better beginning than his key rivals Self Assured and Spankem, Copy That was able to unleash that stunning final split and round out a 53.4sec last 800m after working to the lead early in the 2400m feature.

“He was very good, he made a good beginning and once he got to the front it was going to be hard for the others to catch him,” Green said.

The All Stars pairing’s New Zealand Cup stocks did not take a hit when they produced game efforts to fill the trifecta in a race Copy That made mathematically impossible for them to win.

His brilliant victory was not the only way Copy That made his presence felt at Ashburton on Monday.

The entire had plenty to say before and after the Ashburton Flying Stakes – letting out plenty of roars and squeals at any horses that got close to him.

Though that might just sound like ‘coltish’ behaviour, it also gives an insight into what makes Copy That such a brilliant and determined racehorse.

“He is never like this at home, he is usually pretty quiet,” Green said.

“But when he gets here – or to any racetrack – he sees all these strange horses and everything going on and he just puffs himself right up.”

Copy That shot back into New Zealand Cup favouritism just as quickly as he fired down the Ashburton straight.

The northern sensation is now the $2.80 equal favourite for the great race alongside Ashburton Flying Stakes runner-up, Self Assured.

Trainer-driver Mark Purdon was pleased with Self Assured’s effort to fight on for second after sitting parked throughout.

The five-year-old stepped well in his third attempt from the unruly, which made him eligible to start from a regular barrier spot in the New Zealand Cup.

Purdon said he would consider taking the five-year-old off the unruly, but it is most likely he will remain there for the 3200m feature.

Spankem could not match Self Assured’s good beginning and made a rare blunder at the start before recovering quickly and finding a nice run in the one-one.

The six-year-old then put in a sound effort to run third, which saw him hold down third favouritism for the New Zealand Cup at a $3.50 price.

Thefixer and Ashley Locaz both produced encouraging runs given their recent circumstances when fourth and fifth, respectively,

Thefixer was just a head behind Spankem in a much-improved effort following his fair last start fourth behind Classie Brigade at Addington.

Ashley Locaz was another head away in fifth after touching down in Canterbury just days before Monday’s race following his recent Australian campaign.