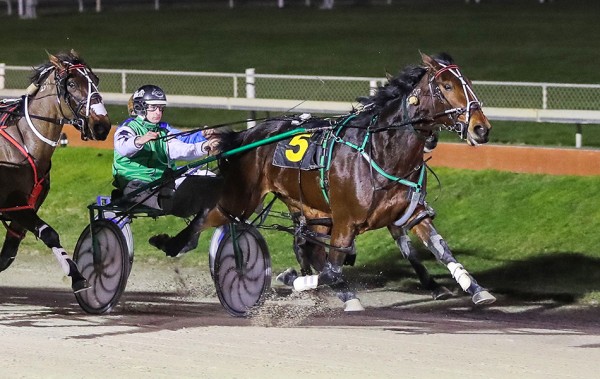 A decision to send Rocknroll Mama north to Cambridge in May has proven to be a masterstroke by trainer Matt Purvis.

In her seven subsequent starts she has placed on five occasions, including the Gr.1 4YO Diamond (1609m) last month, and won at Addington Raceway on Friday night.

“She has really developed with the trip away,” Purvis said. “A lot of credit has to go to Mike Berger and Luke Whittaker, they really looked after her up there.

“The Jewels was probably the best run she has gone. Chasing the field has just been a blessing for her so now she gets driven accordingly and is reaping the rewards.”

Similar tactics were adopted in the Mid-Winter At Addington – 6th August Mobile Pace (1980m) on Friday night, and she was rewarded with a win.

Driver Robbie Close launched her off the gate to take an early lead, but they quickly handed up to Town Echo who they were able to stalk for the remainder of the race.

Rocknroll Mama was able to scoot up the passing lane and wear down the leaders to win by a half neck over Riveered, with a further neck back to Smiffy’s Terror in third.

Purvis was duly impressed with the result but admitted to thinking she may have been found wanting for speed turning for home.

“The way the race was run I didn’t think she would have enough speed to pick them up from the passing lane, but to her credit she stuck to her guns and got the job done,” Purvis said.

“Riveered and Town Echo were the two to beat in that race. Riveered kicked away and I was thinking that we were going to run another second, but she finished it off well.

“She has been ultra-consistent and she deserved that win tonight.”

Purvis said Rocknroll Mama has been a pleasant surprise this season and has been going from strength-to-strength, and just may find herself in a few mares Group races next season.

“She has got a lot better this season, she has started to figure the game out,” he said.

“When we first got her she was lazy and didn’t really know what she was doing, and you had to keep niggling at her. Now she has really picked up the bit and has figured out her job.

“We looked at giving her a spell, but a mare in-form is one that you have got to keep racing. She doesn’t do a lot during the week, she just has a quiet canter.

“She is really going from strength-to-strength, so I would say we will give her another couple of starts.

“The way she is going she is earning her spot towards the mares races, but we will just keep racing her in her grade, she is an eftpos card at the moment.”