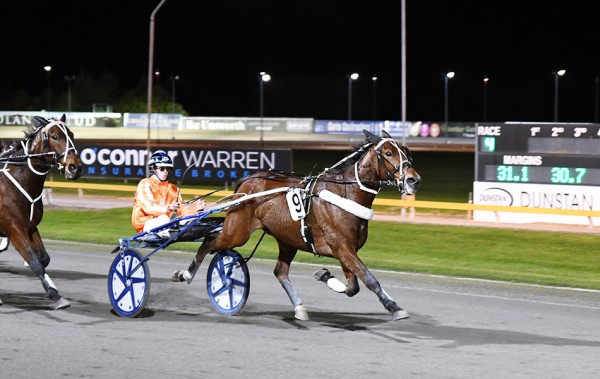 Cambridge trotter Ivegotbills is more than paying his way with his recent form.

The Nicky Chilcott-trained six-year-old recorded his third victory in his last four starts when winning the Mico Handicap Trot (2200m) in the hands of junior reinsman Zev Meredith at Cambridge Raceway on Friday night.

Ivegotbills was given a quiet trip on the markers for the first lap of the race before Meredith found the back of Majestic Harry and secured the one-one position.

With the economical run, Meredith was able to launch his charge three-wide turning for home where Ivegotbills was able to run away to a three-quarter length victory over his fast-finishing stablemate Phoebe Imperial.

Meredith was pleased with the win, his second behind the gelding in as many starts.

“He is a lovely horse, he has been racing really well and he got a really nice run,” Meredith said. “He got to sit on the fence for 1000m and popped off into the one-one, so it suited him really well.

“I have had one other start on him before, I got the penalty-free win on him in my first drive on him. I am really appreciative of Nicky for giving me the drive.

“Nicky’s team is going well at the moment and Phoebe Imperial is a nice horse, that was a really good first run back for him.”

Meredith now sits on seven wins for the season and he said he is really enjoying driving.

“I am really enjoying the game and I am loving the season I have had,” he said. “I appreciate everyone giving me the opportunities I am getting.

“I am working for Derek Balle. He is great to work for, he is teaching me a lot, and he is giving me plenty of drives as well.

“I have driven three winners for him this season, so he has definitely been a big help to me.”

Meredith has qualified for the McMillan Equine Feeds New Zealand Junior Drivers Championship next week and said he is really looking forward to competing in the series.

“Making it into the Junior Champs was a big buzz, especially being in my second season of driving,” he said.

“I can’t wait for it, it will be a great experience. I will get to meet a few people and make a few connections down south. Hopefully I can drive a winner while I am down there.

“I have only been down south once before, so I am really looking forward to it.”

The Whale takes us through today's meeting at Addington on Sunday, July 25.

Nathan Williamson put a full stop at the end of his record-breaking season when Get Up N Dance won at Addington on Friday night.