Consistency pays off for Sense Of Occasion 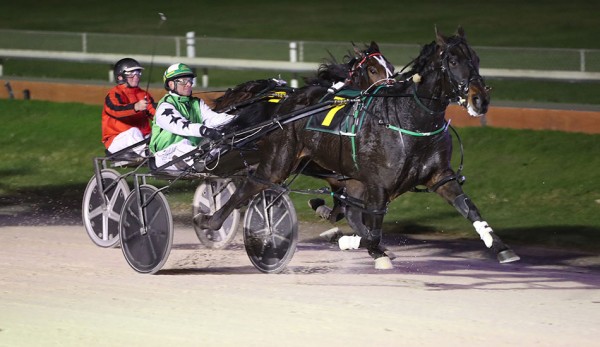 Sense Of Occasion has been knocking on the door for a win for some time, and it finally opened at Addington Raceway on Thursday night.

New Zealand premiership leading driver Blair Orange sent Sense Of Occassion forward early from his wide barrier in the Mid-Winter At Addington Mobile Pace (2600m) to wrestle an early lead off Conquer Me.

The finishing order didn’t change from there, with Sense of Occasion scoring a 1-1/2 length victory over the Robbie Holmes-trained and driven mare, with a further 1-1/4 lengths back to Sonic Reign in third.

It was the second career win for the four-year-old gelding, who has been a model of consistency since joining trainer Matt Purvis’s Woodend Beach stable in February.

“He has been knocking on the door for some time and he finally got a nice run to suit, and he capitalised on that and delivered,” Purvis said.

Purvis is hoping he can continue his winning ways when he backs up at the Christchurch track next week.

“There is a junior drivers race next week he will target and then I will reassess whether he has a few weeks off or not,” he said. “He seems to cop the racing and he is still going well, so we might make hay while the sun shines.”

The sun hasn’t been shining in Canterbury, with torrential rain causing severe flooding in the region, which Purvis said has affected his team’s training over the past week.

“With the rain, it has been quite hard to get the work into the team,” he said. “The way the tides have worked, we have had no beach to be able to work them and Davey’s (Butt) tracks have been quite wet too, so we have had to resort back to a lot of cantering and swimming to pass fitness because the track was even too wet to jog them on.”

In order to catch up on their work, Purvis has been forced to stay home this weekend instead of heading up to Cambridge to watch stable runner Rocknroll Mama compete in the Group One Woodlands Stud 4YO Diamond (1609m).

While pleased with her three runs in the north over the last month, Purvis doesn’t hold great expectations with his mare after she drew the outside on the second row for Sunday.

“She has had a great campaign up there so far. She has had a couple of seconds and she was unlucky at Alexandra Park,” he said.

“She deserves her spot to be there on Sunday, it’s just a shame about the draw, she will need a lot of luck from there.”