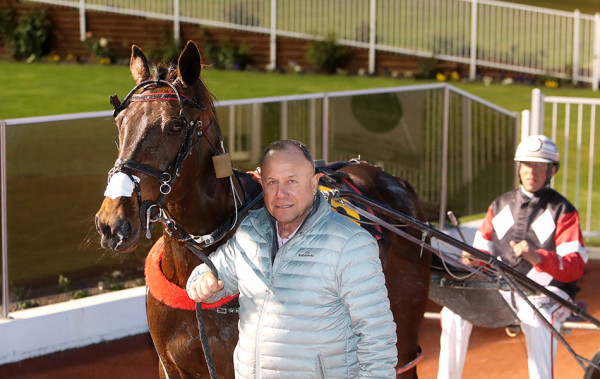 It’s been 15 years since Robert Dunn won the Gr.1 New Zealand Trotting Cup (3200m) and he believes it’s about time he got his hands on the coveted mug once again.

The premiership-winning trainer took out the great race with star mare Mainland Banner in 2005 and he would dearly love to add another Cup to the trophy cabinet this year.

While Dunn placed in the New Zealand Trotting Cup on three consecutive occasions in the mid-nineties with Master Musician, he has also come close in subsequent years when Franco Nelson finished runner-up in 2014 and Classie Brigade was third in last year’s edition.

“It has been a great race,” Dunn said. “Mainland Banner is still the only four-year-old mare to have won the Cup.

“Classie Brigrade was definitely unlucky last year and Franco Nelson just got beaten by Adore Me by a nostril.

“We are due to win the Cup and we have got three horses in it this year and the way Classie Brigade is going he is going to be a real contender.”

Classie Brigade cemented his place as one of the main contenders for this year’s Cup with his New Zealand record performance in the NZMTC 120 Years Old Today Handicap Pace (2600m) at Addington Raceway on Friday night.

Driver John Dunn elected to take a conservative approach with Classie Brigade, staying at the rear of the field for the majority of the race before storming home to win by a length over stablemate Henry Hubert, with a further length back to Stylish Memphis in third.

The eight-year-old gelding set a New Zealand record of 3:08.9 for 2600m, lowering Thefixers previous mark by 1.1 seconds, and Dunn was impressed with the dominant display.

“It was really pleasing tonight, particularly to beat the record,” Dunn said. “To beat it by more than a second was a really good effort.

“He has been one of those horses who tends to be up on the pace, but to come from last and find the line so strongly was very pleasing.”

“It was a big improvement by Henry Hubert, we were rapt with his run as well,” he said. “We just thought the way he had been training he was on the improve.”

The pair are currently on a path towards the New Zealand Cup where they will be joined by stablemate Heisenberg.

“We have got a wee bit of work to do with Heisenberg to get him going a bit better,” Dunn said. “But he is a horse, like Henry Hubert, that when they hit form they hit it really strongly. He deserves his spot in the race.”

Heisenberg is set to race at Addington Raceway next week and he will then likely join his stablemates in the Gr.2 Kaikoura Cup (2400m), which was won last year by Classie Brigade.

“Henry Hubert won the sales series race up there a couple of years ago, Classie Brigade won the Kaikoura Cup last year, and Heisenberg won the four and five-year-old series at Kaikoura as well,” Dunn said.

“Johnny (Dunn, stable foreman), the owners, and I will sit down and make a plan, but we are thinking Kaikoura and Ashburton.

“There are options right across the board for us and I am really looking forward to Cup Day this year.”