Wanna Play With Me sensational 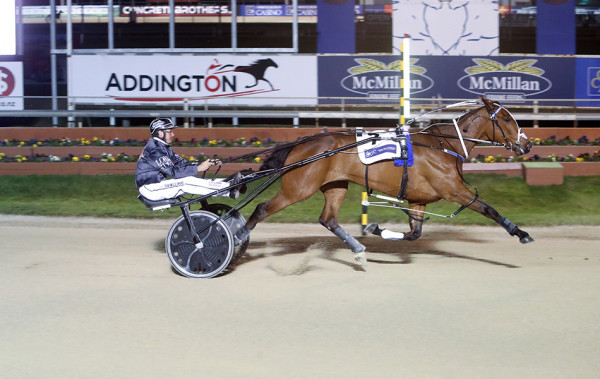 Wanna Play Me With Me did not want to play with her rivals in the Sires Stakes Series Final at Addington on Friday night, so she ran away from them and smashed a national record to win.

The Mark Purdon and Natalie Rasmussen trained filly delivered an incredible performance when shrugging off a tough trip sitting parked to power away to win the delayed running of the group 2 feature for last season’s two-year-old trotters by three and a half lengths.

Wanna Play With Me had not raced her own age-group since August, beating older horses to win her two prior starts.

Form comments leading into Friday night’s 1980m event suggested the race would be a step up in class for her.

“I read the form comment before the race and it said it would be a step up for her after racing the older horses.”

“I didn’t think it would be considering the times she had been running.”

Wanna Play With Me went faster than she had before in Friday night’s $50,000 feature, taking a full second off the national record for 1980m.

Her 2-26.3 time eclipsed the previous mark set by Chloe Rose in February.

The Love You filly will head to the spelling paddock following her breakout victory.

If she emerges from her break as well as she did from her previous freshen-up she will prove even harder to beat.

Wanna Play with Me was freshened after disappointing in two runs late in the winter, but quickly bounced back to her best with her two wins leading into Friday night’s race.

“She just had a couple of starts where she went below par, but overall her record has been pretty good,” Purdon said.

“She is a lovely filly, she will head to the paddock now.”

Wanna Play With Me was not just physically primed for her victory.

“I wasn’t too worried when she got left parked because even though it was a good speed she relaxed really nicely.”

“She is a really intelligent horse.”

Though soundly beaten by the winner, Outamyway ran a big race for third after working three-wide in the open from the 800m to take second.

The favourite, Bitamuscle, battled into third after enjoying a nice run in the trail.

Wanna Play With Me followed in footsteps of her dam, Wanna Play, by winning the Sires Stakes Final for two-year-old trotters.

The Majestic Son mare won the group 2 feature in 2014 for breeder-owner Trevor Casey.

He also won the race in 2013 with Daenerys Targaryen.

Casey races Wanna Play Me with his partner, Kate Marriott, and Peter Ryder.