Cheddar ready to return to Addington 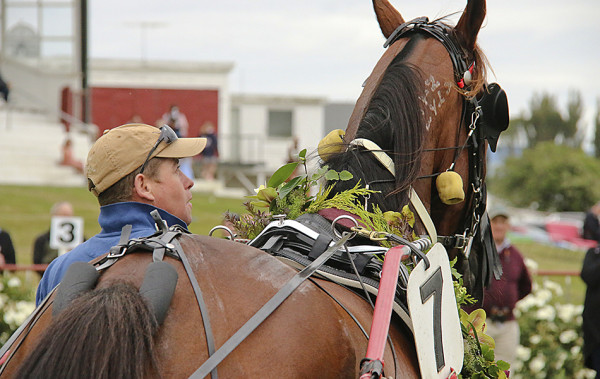 Vintage Cheddar is on his way back to the scene of his brilliant New Zealand Cup Week double after scoring a deserved win in the Winton Cup on Saturday.

The Alister Black trained pacer took full advantage of a perfect trip handed to him by driver Brent Barclay to turn the tables on his fellow Southland stars U May Cullect and Pembrook Playboy to win the 2400m feature.

Second in the Riverton Cup to U May Cullect and second to Pembrook Playboy in the Northern Southland Cup, it was Vintage Cheddar’s turn to take home the silverware on Saturday.

And it means he will take winning form back to Addington when he returns for the Easter Cup, early next month.

“It was a beautiful drive by Brent, he just got in front of That Alexander Guy before they hit that first bend and that put the likes of U May Cullect and Pembrook Playboy another spot further back,” Black said.

“It was perfect, really.”

“We will have a go at the Easter Cup, I think there are a couple of free-for-alls up there for him.”

“We will just see, but the Easter Cup is our long term goal.”

U May Cullect (30m) and Pembrook Playboy (40m) both went big races after being slow away from the tapes.

Both produced scintillating closing sectionals wide on the track as Vintage Cheddar charged home in 56.4sec (800m) and 27.3sec (400m).

Plutonium Lady made her trek of most of the entire country to Saturday’s meeting worthwhile when turning the Southern Belle Speed Series Final into a one-act affair.

The winner of her last two starts at Alexandra Park made it a hat-trick of feature mares races when running away from her rivals after leading throughout.

Driver Sam Ottley credited trainer Mark Jones for having the four-year-old in peak condition after her busy travelling schedule over the past month.

“She certainly doesn’t mind racing and travelling, that’s for sure and she is thriving off it.”

“Mark has done a great job, she is racing super and she has been anywhere and everywhere and to keep her at that level is a great effort.”

Plutonium Lady stopped the clock in 1.54.2 to notch the best time of her career and boost her future broodmare credentials in her three and three-quarter length victory.

Emdeegee came into the race on the back of an incredible 20-length maiden victory at Oamaru and he backed up that performance when scoring by the more modest margin of half a length over his stablemate.

“He has just taken a while and he has had a few issues here and there that weren’t helping him,” Simpson said.

“But we seem to be getting on top of him.”

“We always knew he could run.”

Sarah O’Reilly had Emdeegee in front throughout to notch her 30th driving win of the season.