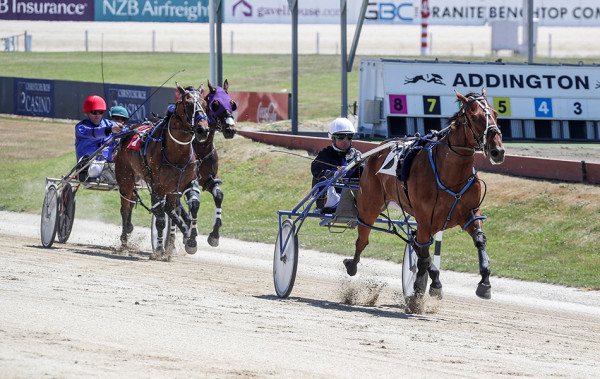 Two key changes sparked Nirvana Beach into producing the most emphatic of victories – a whopping seven and a half length win – at Addington on Friday.

The Brad Mowbray trained pacer broke a winless drought of over two years when putting his rivals to the sword with a 27.6sec second-last 400m to set up a highly impressive victory in race 2 for driver Blair Orange.

The trainer suspected Nirvana Beach may have not been breathing exactly how he should in his last outing when running sixth in amateur drivers’ company at Addington last week.

“We put a cornell collar on him and that seems to have livened him up,” Mowbray said.

“We didn’t think his breathing was an issue but he came past us a couple of times last week we thought he may have made a bit of a noise.”

“So we got a loan of a cornell collar and gave it a go.”

Though the addition of the device, that aims to stop dorsal displacement of the soft palate, clearly had an immediate effect, Nirvana Beach’s victory was also a result of his gradual improvement since joining the Mowbray stable.

The pacer was purchased by a stable amateur reinsman Mike Maynard and some of his family, with Mowbray and some his family also in the ownership.

Nirvana Beach came into Friday’s race after Maynard drove the five-year-old into sixth placing, which came in his third run for his new barn.

“We were still pleased with his run last week,” Mowbray said.

“And to be fair we thought with every run he was getting slightly better.”

“And with the knowledge we had gained it all added up to him winning today.”

Crediting driver changes for improved performances can be a touchy subject in harness racing circles.

But in this case, Mowbray felt an exception to that rule was warranted.

“Mike had done a great job driving him in the amateur races.”

“And he won’t mind me saying this but there is a bit of a difference between him and Blair Orange.”

The Mowbray stable is preparing for their annual trip south to the Otago-Southland holiday racing circuit as Christmas approaches.

Nirvana Beach will likely be among the truckload of horses they take south.

Two horses that went in the opposite direction to head to Addington made their trips north worthwhile with victories at Addington on Friday.

Catch-driver Craig Ferguson slotted the Nathan Williamson trained Dark Horse into a perfect run in the one-one and she again showed her powerful finish to win race 9.

Earlier on the card, Ferguson produced Smokin Bandar for his third victory in just five starts from his Wyndham stable when the five-year-old won race 5.