Triple Eight back in winners circle 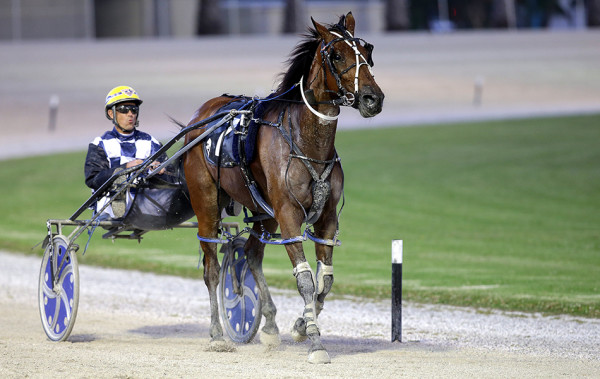 The mystery behind Triple Eight’s great form loss has been solved and that was enough to see him back in the winner’s circle at Alexandra Park on Friday night.

Last season’s Auckland Cup place getter reminded us all how good he is by coming from last to win the main 2200m pace of the night, downing Mach Shard in a 1:55.4 mile rate.

That was enough to win his way into the Woodlands Stud Auckland Cup on New Year’s Eve after a disappointing start to the season.

Punters and trainer Steve Teller knew the six-year-old should have been racing better and a diagnosis of ulcers was ultimately what it took to turn him around.

“We had the vets go over him when he got back from Christchurch and ulcers were the problem,” says Telfer of Stonewall Stud.

“Once we worked that out and treated them he has been a different horse.

“His work has been really good and I was confident going into tonight.”

Punters who took the shortening odds about Triple Eight wouldn’t have been feeling too cocky in the middle stages but the hot speed helped and driver David Butcher timed his mid-race move to perfection.

That put him in control of the race from the top of the straight and with the aid of sliding blinds he concentrated all the way to the line.

“He can shut off a bit when he leads so we added the blinds and he has won well,” says Telfer.

He will now confirm the Auckland Cup tilt with Triple Eight’s owners but with the race lacking several of the big guns it would seem a logical aim.

Mach Shard showed he can be a chance in the big race with his improved second while Gambit went his best race of this campaign in third ahead of the eyecatching Matt Damon who ran on well in his first Alexandra Park start.

The other favoured runner Christianshavtime had no luck in the running and his run is best forgotten.

Mach Little Soaky caused an upset for trainer-driver Matthew White when he downed La Rosa, Braeview Kelly and Italian Lad among others in a strong lower grade pace while Rain Mist And Muscle continued the great recent run for the Wallis/Hackett team when she won the major trot.