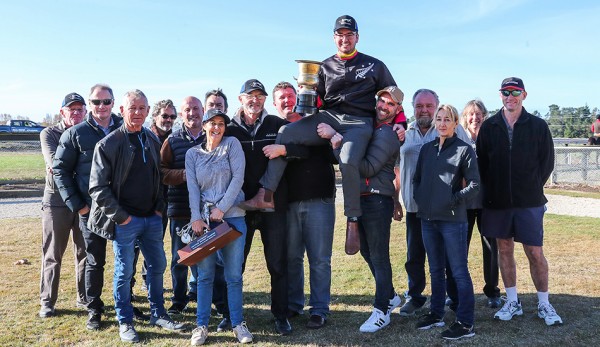 Andrew Fitzgerald enjoyed one of the biggest thrills of his harness racing career when clinching victory in the New Zealand Amateur Drivers Championships at Rangiora on Sunday.

The Canterbury reinsman went into the final day of the national competition with a handy lead and managed to maintain a break on his rivals with two top-five finishes in the final two heats of the four-race series.

Fitzgerald, a former junior driver, went into the championship without a prior win as an amateur driver but emerged as the national champion and with a career highlight.

Trainer and friend Matt Purvis played a vital role in that success.

Purvis not only helped Fitzgerald move into the amateur ranks, but he also provided Fitzgerald with a vital drive behind Wee Ring The Changes in heat three.

The horse’s second placing all but sealed the reinsman’s win going into the last heat.

“I transferred my licence because Matt was going to have a few in the amateur races,” Fitzgerald said.

“My junior’s (licence) was coming to an end and I thought they are nice, tidy races now and with Matt having a few that can go in it you are guaranteed a drive every two weeks.”

“It is a good way to keep my hand in, I was never going to be an open driver with not working in a stable.”

“It suits perfectly with my other work and I help Matt out a bit and he always puts one in for me.”

After his second behind Wee Ring The Changes in heat three, Fitzgerald sealed his victory with a fifth behind New Zealand’s most-raced standardbred in the 11-year-old veteran Alexy in heat four.

“They ran along a bit and that helped him, I always thought Alexy was going to get a couple of points at least and that was all I really needed.”

Fitzgerald set up his championship win with his first amateur driving win in heat one at Cambridge behind Mighty Monica, trained by series runner-up Sheryl Wigg.

The victory was a relief as the reinsman ended a run of placings with his breakthrough victory.

“I couldn’t believe I couldn’t get a win before the champs, but I had run enough seconds – about six.”

Fitzgerald is well known as a social media manager for several Canterbury stables.

Most recently he has been involved in the setting up of syndication and ownership website ownahorse.racing .

The progress the site has made since its creation this year means Fitzgerald may look to move from Canterbury in search of more opportunities in Australia.

“I am just figuring it all out at the moment.”

“The site has had really good support with a lot of the main (thoroughbred) trainers and we are working on a few deals with people in Australia at the moment.”

“It is helping people get horses syndicated.”

“It helped the harness guys that supported it, which were the mainly the young trainers ... it shows it is needed.”

“You have got to make it easier for people to get the information these days.”

“So if we can grow it, obviously the galloping market is the biggest market.”

“But I like having the harness on there because it is good for the guys to get exposure to some of the biggest owners.”

“They’re on the same site as Gai Waterhouse and all those trainers.”

“If it works out I would like to go and experience something new.”

Series runner-up Sheryl Wigg finished as well as she could by taking out heat four with Dalness Arizona.

Though Fitzgerald already had too much a break on his northern counterpart.

John Kriechbaumer finished down the track in heat four but had enough points to take third in the competition.

Heat three at Rangiora on Sunday was taken out by Alan Edge, who drove Pete’s Dash to victory.

Edge finished in fifth position in the series, behind fourth-placed Frank Phelan.