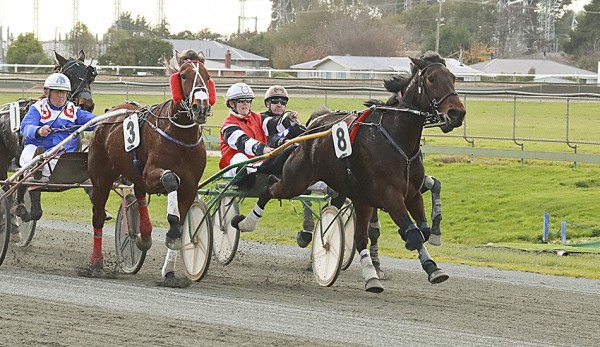 Michael House celebrated a year as a Southland trainer by producing a winning treble at Ascot Park on Saturday.

House moved a team of horses to the Invercargill track on May 30 last year and Saturday’s meeting was the last before a full year ticks over and his Southland base celebrates its first birthday.

It was appropriate that Zoned Scarlett brought up his winning treble in race 5 with Samantha Ottley in the sulky.

The trotter was House’s first winner from his Southland base, with 28 more in the following 12 months.

Zoned Scarlett’s victory came after Santanna Mach (race 2) and Midnight In Memphis (race 4) scored for Blair Orange, who has been a key figure in House’s Southland set up.

Though pleased with his success in the deep south, House admitted it was disappointing that those wins have not resulted in him attracting new owners.

“I haven’t secured any new owners, I am funding it all and I am not making any money.”

“I am wasting a great fortune and if I didn’t have another great business supporting it all I wouldn’t be doing it at all.”

“But I enjoy racing, I started out at the top-end desiring good horses and I got rid of all the poor ones.”

“Then I used the system to sell hundreds and hundreds of horses.”

“Then I went through the stud thing and now I have gone back to my roots over the last five years.”

“You never get sick of winning races, no one does, it doesn’t matter what sort of race.”

“It is always uplifting, it is a lot of scheming and planning.”

“I think anyone will tell you that, they don’t care what the size of the cheque is, it is just about being part of something.”

“And I am just a small part of it, I have got wonderful staff and all the great drivers in Christchurch.”

“They have all got a role in it and my one is only a small one.”

House modestly deflected praise for his southern success, but was not hesitant in commending his Southland stable manager Tyler Dewe.

“Tyler has done a wonderful job, I can only thank him and he deserves all of the recognition he gets.”’

“He has been under pressure after losing some staff so he did a great job this week.”

Ultimate Stride’s win at Ascot Park on Saturday is set to have a major impact on the Harness Jewels.

The Phil Williamson trained trotter effectively booked his ticket to Cambridge with a front running victory in race 8 for driver Matthew Williamson.

The win took Ultimate Stride from outside the Harness Jewels 4YO Ruby’s top 12 qualifying spots to 10th position.

The four-year-old’s win may not have looked brilliant in its last 100m, with runner-up Boyz Invasion getting within three-quarters of a length at the line.

However, Matthew Williamson said he let Ultimate Stride cruise to the line comfortably knowing the race was safely in hand.