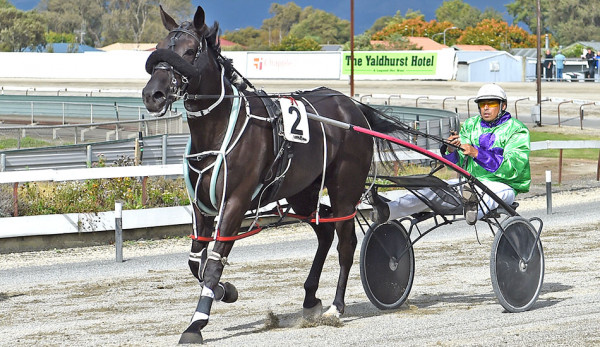 Manawatu Raceway’s Tuesday meeting will live long in the memory of Tracy Cadwallader.

The Sweet Lou gelding was taken straight to the lead by driver Jay Abernethy, who was able to set the tempo throughout and steer Easy Does It to a 1-1/4 length victory over It’s A Laugh.

“I was absolutely rapt with him, he did it very easy,” Cadwallader said.

In the following race stablemate Sipowizc added to the occasion when holding on to finish second behind Needamargarita in the Outback Trading Company (Grad Series) Heat 2 Mobile Pace (2000m).

“He is getting there,” Cadwallader said. “Alicia (Harrison, driver) said he just got a little bit tired in the last bit, but that’s okay, it still qualified him for the maiden series so I am rapt.”

As the only harness racing trainer in Hawke’s Bay, Cadwallader spends a lot of time on the road and she was thrilled that all of her hard work has started to pay off.

“I spend a lot of time travelling, but it has been worth it in the end,” she said.

“I have had a lot support. All the trainers here (Palmerston North) have been good, and I have got a fantastic blacksmith, Dale Cameron, and a fantastic physio, Brendan Jones.

“I often come over to do a workout here (Palmerston North) every now and then, and I also work at Waipukurau, which is a grass track.”

Tuesday’s win was more than 20 years in the making, with Cadwallader initially training in the late nineties before taking a 20-year break to ride trackwork for a number of thoroughbred trainers throughout the North Island.

However, her love for harness racing, ignited by her father, never faded and she decided to return to the sport last season.

“My father had a horse called Nover Circle (who had four starts for Cadwallader) and he won four races,” she said.

“I have been meaning to get back into it for a long time. I rode track work for a long time and then took a few years off to have my daughter, who is now five.

“I thought it’s time to get back in the game, and I really love it.”