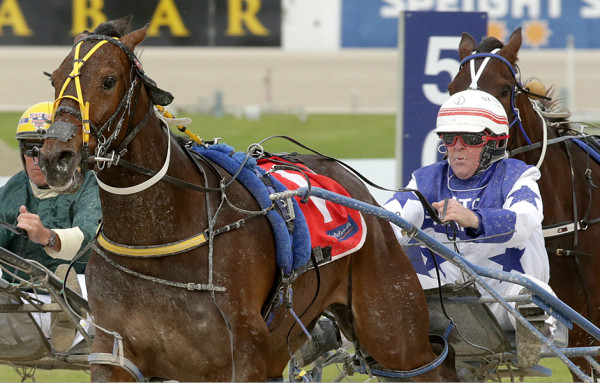 Their exciting pacer Christianshavtime outclassed a small but select field to takeout the Congrats “Fergie” On 2000 Wins Mobile Pace (2200m).

The son of American Ideal was beaten for gate speed by seven-win gelding Tommy Lincoln and Group Two performer On The Cards and settled three back on the fence.

Driver Maurice McKendry bided his time off the pace before positioning his charge in the one-one with 450m to go. Christianshavtime improved three wide turning for home where he was able to show his customary turn of foot to run over the top of his rivals to score by a neck over Tommy Lincoln, with a further 2-1/2 lengths back to On The Cards in third.

While Christianshavtime did beat Tommy Lincoln in their three previous meetings, Hollis was buoyed by his performance on Friday.

“It was a big step up to racing those horses,” he said. “We have always thought a bit of the horse and he showed it tonight.

“He trialled super on Saturday. Those four horse races can be funny races but we thought with the right run he could definitely beat them.”

It was the four-year-old’s fourth win from 21 starts and Hollis believes there is a bright future in-store for the gelding.

“He is an Auckland Trotting Club syndicate horse and Shane, my partner, bought him at the sales down south. He has just done a super job so far,” Hollis said.

“We will race him sparingly through the Christmas carnival and the main aims are going to be the four-year-old races in April and the Jewels.”

Christianshavtime is continuing an exciting time for the Pukekohe barn with stablemate Luke John also impressing with his win at Alexandra Park last week, and yearling sales preparation in full-swing.

“We have got 15 on the books this year so it will be a busy few months ahead.”