A Swell Time had at Addington 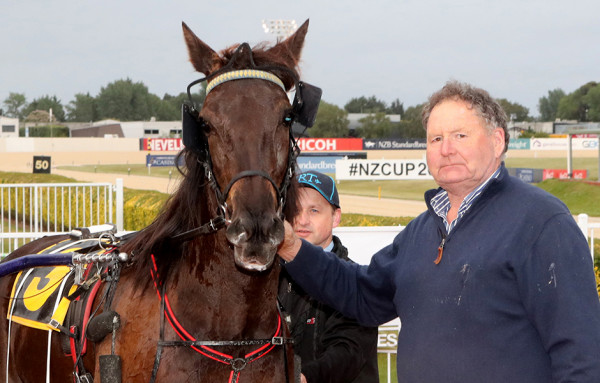 Five-year-old mare Swell Time kicked the evening off in style when taking out the opening race on the card, the Teltrac Communications Mobile Pace (1980m).

She was launched off the gate by driver Matthew Williamson to take an early lead and Williamson was able to dictate terms throughout, giving Swell Time the reserves to kick clear of her rivals in the straight to win by 2-1/2 lengths over Majorca, with a further 1-3/4 lengths back to Voodoo Priestess in third.

The A Rocknroll Dance mare took some strong southern form into the race and Baucke was confident of a good showing from his charge.

“I thought she would go close, but she did that pretty easily. Matty (Williamson) was pretty stoked with her,” Baucke said.

“I thought she was good enough to beat that field. She got an easy first quarter, so she was going to give it a good show after that.”

Later in the evening Baucke was back in the winner’s circle celebrating a double when outsider I’mallaboutthebase took out the Tony McKenzie Memorial Mobile Pace (2600m).

The daughter of Shadow Play was given the perfect trip in the trail by Williamson and they were able to utilise the passing lane to get the better of pacemaker Mossman and held out the late challenge of Spellbound to win by 1-3/4 lengths.

Baucke was pleased with the win and he thought she was a better chance than her $32.70 winning dividend alluded.

“The other week she drew eight, got parked and pulled her head off, which is not like her. She faded but still went okay,” Baucke said.

“She went good at the workouts last week and I thought if she could get the trail, she could run a place.

“She is a good, tough mare and once the pace went back on she could absorb that.”

Baucke trains five horses on his Woodlands property and he said he will struggle to wipe the smile off his face on the seven-hour float trip home.

“You don’t often come to the Met and do that. It was a great thrill, I am pretty stoked,” he said.

While it is a 14-hour round trip to race at Addington, Baucke said he is lucky enough to be able to call on friends to break-up the trip.

“I am mates with (Ashburton trainer) Ben Waldron and I stay with him, so that breaks the journey up,” Baucke said.

“It’s a nice place for the horses to stay there, it’s quite tranquil for them. They are quite used to coming up here, it’s a second home for them now.”

While Baucke has been training for a decade now, he said he has had a lifelong passion for horses, and he was finally lured into racing at the turn of the century when he moved south from his former Waikato-base to further his farming career.

“I have always loved horses,” he said. “I had a hack as a kid and then got a bit heavier. My wife’s family had standardbreds and thoroughbreds, and Dad had a couple of pacers, so I used to drive them.

“We moved down from the Waikato in 2000 and I moved next door to Dave Kennedy, and I used to help Dave out. They had a three-year-old filly Operative Asset that wasn’t going to make a racehorse, so we put her in-foal.

“I started breeding from her and Citylight was the first one and it all started from there.”