All options open for Bolt For Brilliance 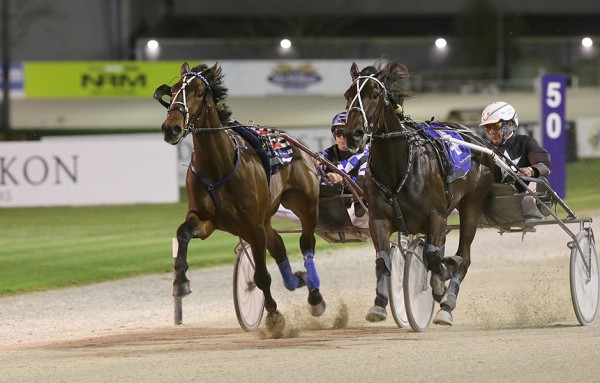 All of trotting’s major targets are now back in play for Rowe Cup winner Bolt For Brilliance and that could include leading the Kiwi charge at the Inter Dominions later this year.

The two-time Jewels winner went to a new level when he thrashed his opponents in the Rowe Cup at Alexandra Park in May, suggesting he may have closed the gap most of the way on champion trotter Sundees Son.

With that crushing win coming at the end of a busy series of campaigns dating back to last spring trainer-driver Tony Herlihy was left musing which targets he may allow Bolt For Brilliance to miss in his new campaign but his views on that are very fluid as the five-year-old comes back into work.

“He is back now and looks great,” says Herlihy.

“Originally when he went to the paddock I thought we might give Addington and Cup week a miss and concentrate on the Inter Dominion on Victoria in late November and December.

“But he has come back so well and I think he might come up quickly enough that he could go to Christchurch if we want him too whereas initially I wasn’t so sure.

“So I have some decisions to make further down the track and that will of course be after I speak with the other owners.”

Bolt For Brilliance was so dominant in the Rowe Cup it suggests his steady diet of racing over the summer has mentally taken him to the next level but Herlihy, and the connections of our two other open class trotting stars Sundees Son and Muscle Mountain, still have some juggling to do.

The open class trotting season will be split into four main zones: spring racing in Canterbury leading into Cup week and the Dominion as well as a group one in December, the Inter Dominions in Victoria in December, the Great Southern Star and support races also in Victoria in February and March and the autumn groups ones back in New Zealand culminating in the Rowe Cup.

While the connections of Sundees Son have expressed a desire to go to Australia his body is starting to show signs of wear and tear and he could stay in New Zealand, close to his beloved beaches to work on, and still race for nearly $1million in races predominantly suited to his unrivalled staying prowess.

He will aim for a third Dominion win at Addington during Cup week for sure before any Australian campaign is confirmed and his connection’s desire aside, he is the most likely of the three superstars to stay closer to home.

Muscle Mountain is also back in work with the Hopes down in Canterbury and is being aimed at races like the Flying Mile at Ashburton heading into Cup week and while the Inter Dominions hasn’t been discounted totally, young driver Ben Hope says the Great Southern Star in February suits far better.

“We all know what a good sprinter he is and I think that Great Southern Star format (two sprint races in one night) would suit him so while it is a long way away that might be his more likely Australian target,” says Hope.

The very real possibility neither of his arch rivals could go to the Inter Dominions make the series a perfect target for Bolt For Brilliance, especially with the final now raised to A$250,000.

“It is definitely one of his targets and it will just depend whether we take him to Christchurch first or not,” says Herlihy.

“I think he would handle the three heats in a week and then the final a week later format at the Inters so that doesn’t worry me.

“So the Inter is very much something we are thinking about and could well end up his main target.”

If Bolt For Brilliance heads to Victoria, a state Herlihy has had much success in his training career, he could well be the leading light of the Kiwi assault on the Inter Dominion as superstar pacers like Self Assured, Copy That and Akuta are unlikely to head there, leaving the pacing team lacking star power.

That could, of course, change should Self Assured or Copy That come out and win their second New Zealand Cup in November but at this very early stage both their connections have suggested the pacing series is not their main or even a likely target.

With Australia lacking a genuine open class pacing star in the wake of King Of Swing’s retirement the temptation to win an Inter Dominion may ultimately convince those connections to change their minds so bookies and punters faces an interesting few months monitoring how the revised open class seasons unfolds.