Rodger Austin left Rangiora with the perfect result on Sunday.

The Weedons trainer headed to the Westport meeting with just the one runner and came home with the perfect result when BJ Lindenny took out the Inangahua Grey Valley Cup (2600m).

The seven-year-old gelding made a flying start from his 20m handicap to take up an early lead before driver Blair Orange elected to hand up to Prince Teka. 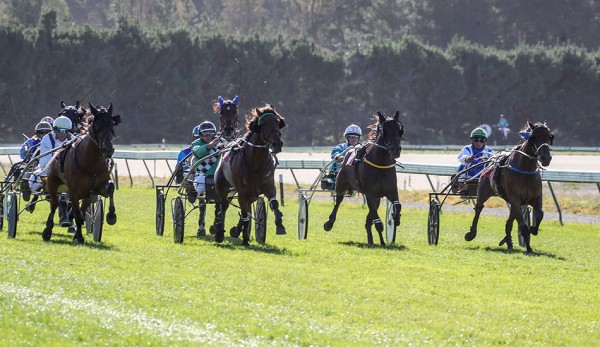 BJ Lindenny lost the trail position to Escargo at the bell, with the Kevin Townley-trained runner dropping back after entering a speed duel with the leader down the straight.

Orange sat patiently three back on the fence for the last lap and he was able to find some space up the passing lane where BJ Lindenny was able to scoot up and secure a half neck victory over Boyz Invasion.

Austin was rapt to get back into the winner’s circle with his charge.

“He went well,” Austin said. “He has been working well and is looking well. He is in a good space at the moment, I am pleased with him.”

BJ Lindenny’s last start eighth placing at Methven broke a string of placings for the gelding, but Austin was still pleased with the run.

The Majestic Son gelding has now won two and placed in three of his nine starts this season and Austin said he took a lot of benefit from his trip up to Nelson at the start of the year.

“He is trying really hard now,” Austin said. “ He has done really well since we took him up to Nelson and Blenheim. He had a couple of placings up there and he has come back, trimmed up a bit and has got really fit. The trip did him really good.”

Austin said he will now try to find his charge another grass track assignment.

“I’ll have to look at the programme but he is in a tricky class now,” he said. “I would prefer a grass track meeting for him, because he seems to be better on the grass, but we may have to line-up at Addington.”