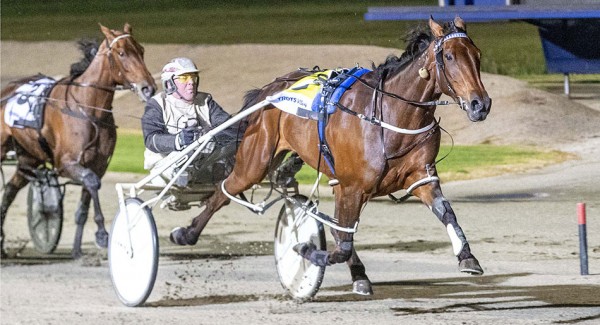 However, Butt is well aware of the challenge ahead in one of the strongest three-year-old crops in the Crown final next week.

“She’s very adaptable, but her strength is staying. She’s ground out a lot of her wins. She’s probably tougher than most of them and some others might have as much speed as her, so you’ve got to drive her to her strength.

“She reminds me a bit of Flashing Red, there doesn’t seem to be any bottom to her. She gets out there and relaxes and just keeps giving.

“I said to Nathan a couple of weeks ago, we’ll wait for the final and go to war a mile out.

“It’s going to come down to draws and she doesn’t have the gate speed of a few others, so she’s probably going to have to do a lot of work next week.

“She doesn’t give you a great feel for a champion filly, but she’s bottomless and that’s her strength.”

Butt dictated the terms with a 60sec first half before Ladies In Red moved to sit parked and then Butt put the foot down through a scorching 26.8sec split from the 800-400m.

Bettor Twist still ran home in 27.3sec for a 54.1sec last half to beat Ladies In Red by 7.1m with the improving Treachery sitting behind the leader and finishing close third in a 1min54.2sec mile rate for 2240m.

Her superb win helped Nathan Purdon leave Melton a happy man despite having to be content with second placings in another couple of the Breeders Crown semis.

Emerging two-year-old filly Amore Vita had her chance to run down Petillante, but stuck to the task well and finished a good second in a blazing 1min54.1sec mile rate for 2240m.

“I was coming down to drive a few on the night and Emma and Clayton put me on a few as well,” Hart said. “I liked this filly’s run in the heat and she felt super tonight. She was so strong.”

Purdon’s other runner, Harness Jewels winner A Bettor You, ran well below her best after doing some early work. She tired badly to finish third-last and failed to qualify for the final.

“She was very disappointing tonight. She was gone a long way from home,” Butt said.

Purdon’s spirits were boosted soon after when Queensland Derby winner American Dealer showed a glimpse of his best with a fast-finishing second to Major Moth in a semi of the three-year-old colts and geldings series.

“It was great to be able to drive him quietly and have him hit the line so well in the heat, it gave us some confidence he’d run well tonight and he did,” Butt said.

“Nathan felt he had him the best he’s been since coming to Victoria and that’s how he ran. It’s a good sign for the final, but it’s a strong race.”

Major Moth enjoyed the run of the race behind the leader, Dessie Gee, and used the sprint lane to win well in a 1min54.6sec mile rate.

Yambukian’s run to work hard early from a wide draw, sit parked and still run a close fourth was outstanding.

In the first heat of the 3YO colts and geldings series, Victoria Derby winner Act Now worked to the front and won, but the effort of second-placed stablemate Beyond Delight was stunning.

Beyond Delight came from near last, out four and five wide and ran his own last quarter in – wait for it – 25.8sec to get within 1.8m of Act Now.

“We did what we had to tonight and he won easily, without me pulling the plugs,” she said.

“I sat up on him more than I would if it was the final. He loves to get rolling and take the speed out of them.”

This is a very rare juvenile feature where Emma Stewart and Clayton Tonkin won’t dominate in the Breeders Crown 2YO colts and geldings final.

Andy and Kate Gath hold the trump card with their raw but very exciting gelding Catch A Wave.

Despite being put out of the draw and started from gate 12, Catch A Wave moved around the field early and eventually found the front before winning easily by 6.8m in a 1min56.2sec mile rate for 2240m.

It was his fifth win from just six starts.

The first heat saw a minor upset when Stewart and Tonkin’s Beach Villa worked hard to lead, but stopped quickly and missed making the final.

It looks like Catch A Wave’s race to lose, albeit he is still a work in progress.

The other Kiwi in the series, Life A Beach, just snuck into the final but ran really well for sixth in the first heat.

Caretaker trainer Andy Gath was full of admiration for the run in a heat where they walked and zipped home with Josh Dickie aboard.

“It was a big run to still hit the line strongly after coming three-wide without cover from so far back with Beach Music dictating in front,” he said.

Beach Music surprised even his driver David Moran when he was able to hold the lead from noted brilliant beginner and Beach Music’s stablemate, Joanna.

Joanna eventually got the behind the leader and ran a terrific second, beaten just a head, while Runaway Celebrity was three pegs and finished third.

Comeback filly Tough Tilly moved around to sit parked in the middle stages and fought on well for fourth, to give Stewart and Tonkin the first four home.