The connections of New Zealand’s latest Group One winner now have a decision to make.

Because Bettor Talk Art, an upset winner of the $100,000 Breeders Stakes at Addington on Friday night, is under offer.

Paying $37 for the win, the speedster mare gave trainer Regan Todd his first New Zealand Group One and driver Robbie Close his first anywhere courtesy of gate speed and a beautiful drive in the star-studded field.

Close blasted Bettor Talk Art off the gate to lead but then quickly handed to Need You Now, who copped the early pressure from favourite Bettor Twist.

When they tried to slow up in the middle stages Darling Me swished around to the lead and the pace went back on but Close was able to slide from three back the inner into the clear at the 300m and Bettor Talk Out was too good in a no excuses performance. Need You Now was a brave second just in front of the flashing late run of Callie’s Delight with Allamericanlover peaking on her run late in fourth.

For the second race on end Bettor Twist had no luck and faded to seventh while Belle Of Montana never came on after tracking the winner and pulled up with her racing future in doubt having looked rough in her gait down the straight.

Todd was thrilled to get his first Group One at home and also for Close, who does so much of the stable driving but the ultimate thrill came in achieving the victory for owners Steve and Maureen O’Brien, who bred Bettor Talk Art from the smart mare Lets Talk Art, who Steve trained. 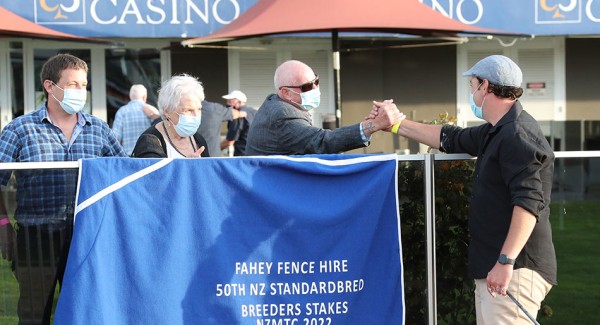 "They are great owners so to get a group one for them here at Addington is very special to me,” says Todd.

“Steve is a good horseman and he comes out and gives us a hand every Thursday."

“You wouldn’t meet better people so it has been a great result.”

The O’Briens, with Todd undoubtedly involved, have some thinking to do now as there was an offer on the table for Bettor Talk Art who is now not only a Group One winning daughter of Bettors Delight but also won last season’s Southland Oaks and the listed Nevele R Southern Mares Classic at the Cup meeting in November.

“It is a decent offer, a good offer but maybe this will change things but of course that is Steve and Maureen’s decision,” says Todd.

The win was the highlight of the night but it had some serious competition after two stellar performances from Cranbourne in the free-for-all pace and Midnight Dash in the open trot.

Cranbourne was liberated in front at the 800m mark in the pace and sprinted down the back in 26 seconds to get all his rivals gasping and he bolted in by two and a half lengths with a 53.7 second last 800m.

He is getting better with hard racing and it must be getting very tempting for trainer Brent White to be looking north for the Auckland Cup and even hoping for an invite to The Race at Cambridge for $900,000.

Midnight Dash is already established in open class and while punters who took odds on about him wouldn’t have felt all that warm and fuzzy when he was last in the middle stages he was simply too good, storming home to beat The Dominator.