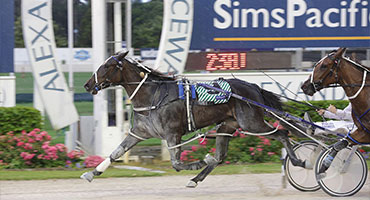 Don’t be put off by Belle Of Montana’s chances of contesting the IRT New Zealand Cup just because she isn’t heading to Alexandra Park this Friday.

Because champion trainer Barry Purdon says the glamour mare is still on target for Addington even though she will bypass the Holmes D G this week.

Purdon elected to leave the five-year-old mare out of the 2700m standing start feature on Friday even though she is thriving.

“I just don’t think she needs a gut buster off a 30m handicap,” says Purdon.

“I could be a really hard race and she is going to wait for the mobile here on October 23.

“After that she will likely go to the Cup trial at Addington but at this stage the Cup is still definitely the aim.”

Belle Of Montana was a close up third behind stablemate Mach Shard in the Spring Cup 10 days ago but that was a 2200m free-for-all as opposed to this week’s tougher trip.

“She is not a dour staying mare like Blossom Lady or even an Adore Me so I don’t think she needs to be lining up in every race.

“But the Cup is the aim where she can be driven for speed and she has the right driver for that.”

Mach Shard and On The Cards will contest the Holmes D G and Purdon says they have both come on well since the Spring Cup but after this week Mach Shard may sneak south.

“Originally I was going to keep them all up here to race before the Cup but now I think Mach Shard will go to Ashburton for the Flying Stakes.

“I think he is a horse who is best kept to standing start races before the Cup and the lead-up races here (at Alexandra Park) is a mobile.

“So he will likely head south earlier while Belle Of Montana and On The Cards can stay here.”

While Belle Of Montana is missing from this Friday’s race it still has not only Purdon’s other pair but Copy That, Star Galleria and three from the Telfer barn so as well as impressive last start winner South Coast Arden.

Purdon is also aiming three-year-old General Montana at the next Sires’ Stakes series and he will contest a northern heat on October 23 to try and earn his ticket to Addington for the Cup Day group one.