Caretaker trainer John Dickie admits he didn’t know what to expect from Lifes A Beach in the Caduceus Club Breeders Stakes at Alexandra Park on Friday night.

Because Dickie says he had hardly fast worked the southern filly since she arrived in his care following the Breeders Crown in Victoria.

Dickie has been looking after Lifes A Beach for trainer Tony Barron for just a few weeks and says when she arrived in his care she was a tired girl.

“She has a big campaign over there so we just freshened her up and haven’t done that much with her,” says Dickie.

“But she has been working with Old Town Road (who made it three on end in the opening race) at home so maybe that helped.”

That light prep didn’t stop Lifes A Beach recording the biggest win of her career in the $30,000 fillies and mares race after a lovely drive from Ben Butcher that saw her secure the trail behind Need You Now and then use the passing lane to win easily.

That all sounds kinda simple but she still had to beat six-time Group One winner Belle Of Montana, New Zealand’s best filly in Bettor Twist, a Jewels winner in Need You Now and last season’s Ladyship Mile winner at Menangle in Stylish Memphis, so one of the hottest fillies and mare’s fields of the year.

So while popular trainer Barron had to watch from afar it was a high class victory to bring up his 500th training success in New Zealand.

Barron says he may not bother coming north next Friday for the next clash of the wonderful female pacers the group one Queen Of Hearts, which is shaping as one of the clashes of the harness racing summer.

“I might leave it all to John for next week cause he did a super job with her, as did Ben,” says Barron.

Whether Butcher retains the drive will probably be a decision left to owners Woodlands Stud but waiting in the wings and able to travel to Auckland for the first time in four months will be a very able replacement in John Morrison.

There was plenty to like about the run of Belle Of Montana while and caretaker trainer Brent Mangos said had Bettor Twist got clear earlier she could have finished a lot closer and she will be better for the group one.

With Darling Me to join the fray next Friday the Queen of Hearts should be a stunner. 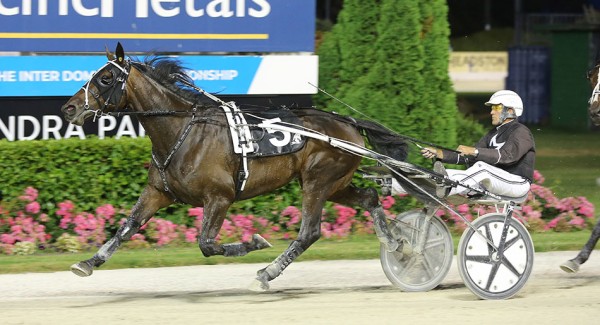 While Lifes A Beach stunned punters with his win Bolt For Brilliance put things back on an even keel for favourites in the open class trot by leading most of the way to hold out Massive Metro and Temporale.

It was his first win since the Jewels and came after he and Temporale really burnt over the opening 600m.

“He was really good and the best he felt in the race was when they came at him at the 400m mark,” said trainer-driver Herlihy.

Bolt For Brilliance is likely to miss next Friday’s open trot and head to the Greenlane Cup at Alexandra Park on December 31.