Backburn was green, but still too good for his rivals in the opening event at Addington on Thursday night.

The four-year-old ran about a little in the home straight but it didn’t stop him from pulling out plenty to score a deserved win for trainer-driver Katie Cox.

“He has been consistent, he is a pretty genuine horse,” Cox said.

“He is still green, but he tries hard and he can make his own luck from the draws a wee bit.”

Raced by Ross, Sandra and Prue Gilmour, Backburn is a towering four-year-old by Sir Lincoln from Caprock mare Minerva.

A Sires Stakes Final winner at Addington Sir Lincoln, who stands at stud in Tasmania, also produced the first winner at the track last week with Art Lincoln running to a strong maiden victory.

Given his size there should be more to come from Backburn when he fills into his big frame as well as when his ringcraft improves.

“Hopefully, he is a pretty big horse so you’d think with a bit of a break he might come back a little bit better,” Cox said.

“We will just see how he seems, whether he has a break now or whether he does a little bit more, we will see.” 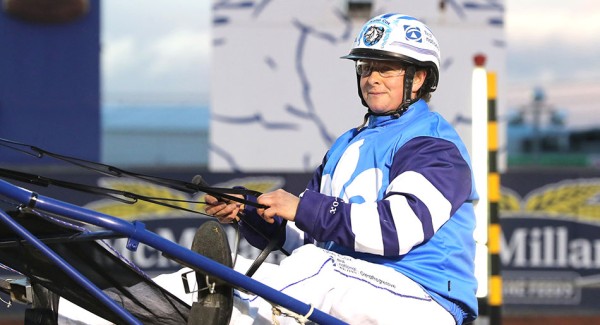 Cox has produced a strong strike rate with her small team this year with Backburn, Magnifique Dimanche and Watch Me the main contributors.

They are keeping the trainer’s name to the fore while other horses are sold out of her barn.

“To be honest a lot of horses that we have qualified lately have been sold.”

“That is just the way it is at the moment with the two-year-olds and horses like that.”

“But I have got a few more that in the next month should be racing and a couple of them are handy.”

Also among a good 2022, Cox prepared seven yearlings for this year’s National Yearling Sales in Christchurch and in a great result all seven were sold.

“I was lucky to have good support for the sales, we had a few for clients to do – seven in the end and overall the results were good.”

Cox will be back in action at Addington on Sunday, combining with the Sue Blake trained Kennedy in race 7.